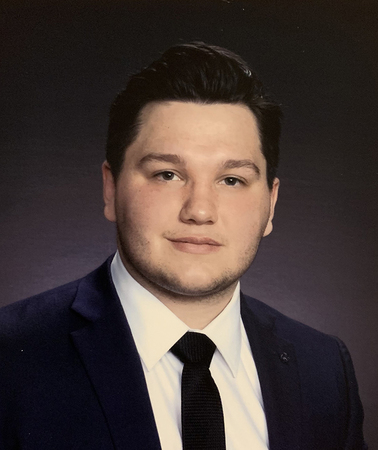 Daniel Nychuk is following in the footsteps of his sister.

Bachelor of Commerce Honors degree in accounting and finance from the University of Manitoba’s Asper School of Business.

But he’s back in the classroom now as he’s a first-year student in the Master’s in Development Practice (MDP): Indigenous Development program offered through the University of Winnipeg.

“I wanted to take a career path towards Indigenous economic development,” Nychuk said of his decision to continue his schooling.

Nychuk didn’t have to go too far to get some insight into the program. His sister Ali was a program graduate in 2021.

“She let me know about it,” he said. “And she got me in touch with the team that helped out.”

Nychuk commutes to the Winnipeg university from Osborne, the small rural Manitoba town that is located about a 30-minute drive south of the school.

Nychuk said a portion of his transportation costs and some of his tuition fees were covered via the $3,000 National Indigenous Economic Education Foundation (NIEEF) scholarship that he received.

He was one of six NIEEF scholarship recipients this year. NIEEF is the charitable arm of Cando, the national organization that promotes economic development in Indigenous communities throughout Canada.

“It meant a lot,” Nychuk said of his scholarship. “It goes a long way to help me through my academic career at the University of Winnipeg.”

Nychuk is already well acquainted with Cando and some of the work the organization does.

This past summer he attended Cando’s Economic Development Youth Summit, which was held at TsuuT'ina Nation near Calgary.

“I got the opportunity to network in person with other Indigenous youth and potential employers that will help me on my new career path,” Nychuk said. “I got to create many lasting relationships within my group as well as with other delegates throughout the week that I still carry with me today.”

Nychuk said he also benefitted greatly from a co-op term while he was at the Asper School of Business. He worked as a transfer payment student through Indigenous Services Canada during this period.

“That gave me the opportunity to go to northern isolated communities in Manitoba,” he said. “And I got to see their economic standpoint.”

During his co-op placement Nychuk visited Bunibonibee Cree Nation, which is almost 1,000 kilometres north of Winnipeg, and Little Grand Rapids First Nation, a fly-in community located near the Manitoba/Ontario border.

Nychuk is hoping he’ll have a position in his future where he will be able to assist various Indigenous communities once his schooling is complete.

“After graduation I hope to continue to work in economic development within Manitoba Indigenous communities,” he said. “I hope to one day be able to be a part of a project that will leave an impact on not my generation but more importantly the generations to come.”