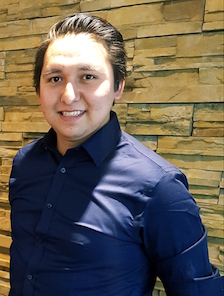 “It was an uphill battle as my community in the past has never supported or has been hesitant to support an off-reserve candidate - let along a younger one. I knew what I wanted to achieve back home and I had three main goals for the community,” he said.

It’s this future focus in such a young person that prompted Devon Fiddler to nominate Dustin to National Youth Panel for Cando.

“Dustin will likely achieve more in his lifetime, and help bring up the community and youth with his positive energy, and commitment to enhancing communication, accountability, and transparency,” wrote Devon Fiddler, social entrepreneur, and the founder and chief change maker of SheNative Goods Inc.

Being selected to the Cando panel would be a tremendous opportunity to do more for youth, says Dustin Fiddler.

“Throughout my life I have never shied away from sharing my thoughts on topics ranging from Indigenous issues to issues that affect all society. Cando also exemplifies everything that I want to bring to my community in regards to economic development,” he said.

Fiddler says he would call on his experience of studying economically successful First Nations and speaking with stand-out Indigenous business leaders to guide him in his position on the panel.

“There is a new generation of Indigenous youth that have hit the job market and the educational institutions over the last decade. In that decade we have seen a lot of changes across the country. That wave is only getting bigger and we need to better prepare our youth to take the reins and be the best advocates, leaders, and people that they can be,” said Fiddler.