Inspiring Success - Metis student has more confidence thanks to scholarship 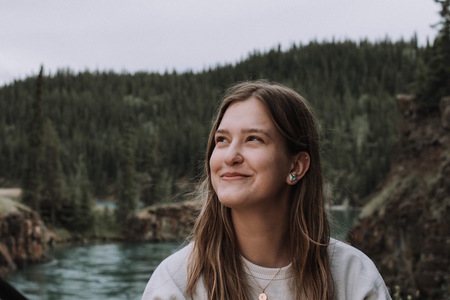 Kiera Kowalski, a 2019 NIEEF scholarship winner, is currently in the Masters in Indigenous Development program at the University of Winnipeg.

Though she’s now working on her second post-secondary program Kiera Kowalski is still uncertain what career path to pursue.

“I’m not 100 per cent sure,” Kowalski said when asked what career she’d like to have. “My mind changes quite frequently.”

But Kowalski, a 22-year-old who is Metis, believes she would like a job that involves some type of Indigenous-based education or development.

Kowalski, who grew up in northwestern Ontario town of Fort Frances, graduated earlier this year from Ottawa’s Carleton University. Her degree, with combined honours, was in Journalism and Communication Studies.

Heading into her fourth and final year of that program, however, Kowalski knew she was interested in pursuing additional education.

That’s because in the summer of 2018 she spent a summer in Yukon. She was one of 20 students participating in the Stories North initiative.

It also inspired Kowalski to apply for the Masters in Indigenous Development program offered through the University of Winnipeg. She’s now a first-year student at the school located in Manitoba’s capital.
Kowalski is also one of three recipients this year of a National Indigenous Economic Education Foundation (NIEEF) scholarship, offered by Cando.

Each winner receives $2,000 via the scholarship from Cando, the organization that promotes economic development in Indigenous communities across Canada.

The three NIEEF scholarship winners will be recognized at the Cando Conference, set for Oct. 27-30 in Gatineau, Que.

“It means I can pursue my studies with more confidence,” Kowalski said of her scholarship, adding it is not ideal for students to be worried about finances while they are pursuing further education.

During her studies at Carleton, Kowalski was taught how to cover a number of topics. But Indigenous issues were never a focus in any of her classes.

“We do a lot of experience-based learning,” Kowalski said.

That was right from the get-go, when Kowalski began her Winnipeg classes in late August. Her program included a one-and-a-half week orientation session, featuring three days being spent in Manitoba’s First River Cree Nation, located more than 200 kilometres north of the Winnipeg university.

Besides being a bonding experience, the venture to the Fisher River Cree Nation is also intended to serve as an introduction to the program’s goals.