Applications are NOW OPEN for Cohort #5.

The Indigenous Coaching Program - presented by Kendal Netmaker and Cando - will continue the empowering work and momentum established by Cando’s Youth Connect and Economic Development Youth Summit. The Indigenous Coaching Program will focus on Indigenous youth engagement and coaching. Through the delivery of several on-going youth initiatives, Cando has learned that engaging with youth, will not only impact them personally, but will also create incredible positive change in their communities.

Youth will be motivated, encouraged, supported – “Coached” - to consider the impact of economic development and entrepreneurial mind-set on their careers and communities; they will be shown the steps in researching business opportunities and the supports available to assist them in starting or growing a business.

The online Indigenous Coaching Program with Kendal Netmaker is designed for First Nations, Métis, and Inuit youth from across Canada within the age group of 17-35 years old. The course will promote to youth leadership skills, resiliency, and the confidence to reach their full potential.

Upon successful completion of this course students will be able to:

3) submit both essay and application form to elsie.moar@edo.ca 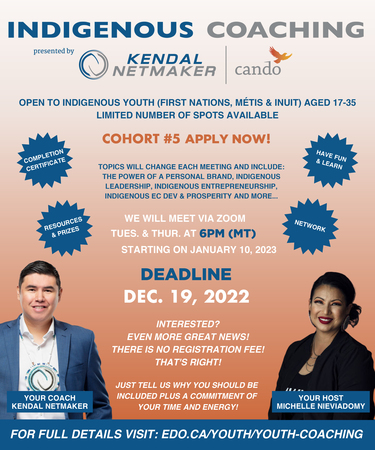 What Netmaker Coaching participants have to say...

In delivering the Links to Learning Webinar Series, Cando has established positive working relationships with Kendal Netmaker, Michelle Nieviadomy and several more subject matter experts – whose skills and knowledge Cando would like to focus towards a significant youth initiative impacting hundreds of Indigenous youth. 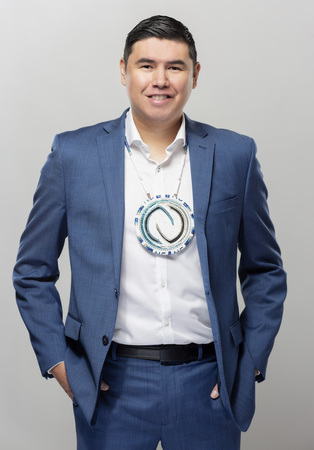 Kendal Netmaker is one of Canada’s leading entrepreneurs and speakers, from Sweetgrass First Nation, SK. He was raised by a single mother who cared for Kendal and his three younger sisters while growing up in poverty and few chances for opportunity.

In grade 5, Kendal’s life changed forever when his best friend from South Africa helped him to play soccer by paying for his soccer fees and driving him to games/practices. This act of kindness opened up a whole other world for him that he would have never otherwise experienced. Two years later, when the family was relocating, they gave Kendal’s family their car; it was a life-changing gift that helped his mother access all kinds of basic necessities that had previously been difficult – and meant that Kendal and his sisters could now take part in after school sports.

The incredible generosity of his childhood friend’s family inspired Kendal to give back when he launched his company, Neechie Gear® – a lifestyle apparel brand that empowers youth through sports. A percentage of all Neechie Gear® profits go toward funding underprivileged youth to take part in sports. While finishing two degrees from the University of Saskatchewan, Kendal worked on growing the brand, which was founded out of Kendal’s small, one-bedroom apartment. After graduation, Kendal opened several stores while sharing his story as keynote speaker. The brand is now sold to consumers across North America through exclusive retail partners and online.

To date, Kendal has founded and invested in 5 businesses, the author of Driven To Succeed and won over 25 business awards, including runner-up at the YBI Global Entrepreneur of the Year & one of Canada’s Top 40 Under 40®. Kendal speaks professionally to thousands of people each year on resilience, leadership and the power of telling your story.

He lives with his wife and two children in Saskatoon, Saskatchewan, where he continues to run his company and provide executive leadership coaching to organizations.

Kendal is on a mission to empower entrepreneurs and leaders around the globe by demonstrating that regardless of where you come from and what you have gone through in your life, you have the power to enact change. Become who you were born to be! 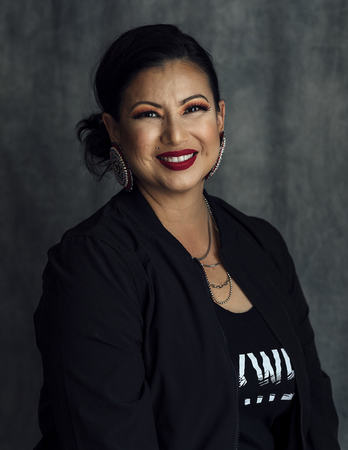 She is a member of Kawacatoose First Nation and while her roots are in Saskatchewan, she has called Edmonton home for the past 20 years.

She is the Assistant Director at the Edmonton Native Healing Centre.

She believes movement is medicine & connection is everything!