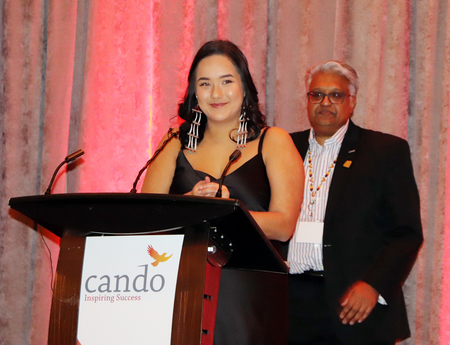 Aubrey-Anne Laliberte-Pewapisconias thanks Manoj Mistry with AECOM for awarding her the AECOM Youth Summit Scholarship for 2019. Aubrey-Anne was presented with the scholarship at the 2019 Cando Conference held in Gatineau, Quebec.

But then the 20-year-old, who is in her third year of studying Business at the University of Saskatchewan, received some positive news that she had won a scholarship, somewhat relieving her financial worries.

Laliberte-Pewapisconias, a member of the Canoe Lake Cree Nation in Saskatchewan, is heading off to England in the new year. She’ll complete her academic year on an exchange program, studying at the University of Essex.

She’ll remain overseas to work in a London-based public relations firm next summer before returning home for her fourth year at the University of Saskatchewan.

Laliberte-Pewapisconias will be able to cover a portion of her costs while she’s in England thanks to a $2,500 scholarship she won through AECOM, following her participation at Cando’s Economic Development Youth Summit this past July in Enoch, Alta.

Laliberte-Pewapisconias said the funds via the AECOM scholarship came at a timely moment as she prepares to head to England.

“The exchange rate is 1.5 times higher than what we have here,” she said. “I was starting to worry how I was going to pay for everything. But this scholarship gave me a little help for that and made me realize things would be okay.”

Those who attended Cando’s youth summit were eligible for the scholarship.

“I was extremely surprised to win it,” Laliberte-Pewapisconias said. “I met so many successful youth at the conference. I thought I wasn’t even close (in terms of accomplishments) to them. I was just happy to have been there and to have met them.”

Following the four-day youth summit, those who wanted to vye for the AECOM scholarship were required to fill out an application. The process included writing a 500-word essay on their goals and the goals of their community.

“I wrote about honesty and how important it is to do something for your community,” she said.

Laliberte-Pewapisconias was presented with her scholarship at this year’s Cando Conference, held Oct. 27-30 in Gatineau, Que.

Cando, the organization that promotes economic development in Indigenous communities across Canada, stages an annual conference, rotating sites throughout the country.

Besides showing up to receive her scholarship award, Laliberte-Pewapisconias had another reason to attend this year’s Cando Conference.

She had been selected to be one of the six members on Cando’s National Youth Panel. Each panelist delivered a presentation on their accomplishments.

Laliberte-Pewapisconias has been proving that it’s not only those from major centres that can make a huge difference.

“I think it’s meaningful, especially coming from a small Saskatchewan community where you hear about bigger places like Toronto and Vancouver,” she said of her participation on the National Youth Panel. “It’s hard to imagine that you too can make a big difference.”

Laliberte-Pewapisconias has already made vital contributions at her Canadian university.

AECOM and Cando thank all the Youth Summit delegates that submitted applications for this scholarship.