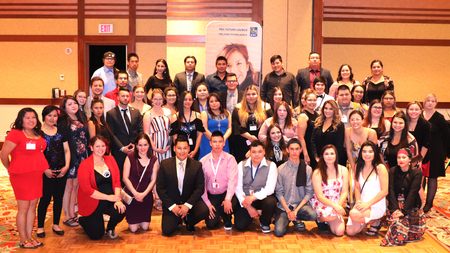 Cando Economic Development Youth Summit stop for a group photo at theend of the learning and hard work. 59 delegates, ranging in age from 18-30 years, from across the country, both Indigenous – First Nations, Inuit and Métis – and non-Indigenous, brought together at the River Cree Resort on the Enoch Cree Nation west of Edmonton from July 22-26, 2018. 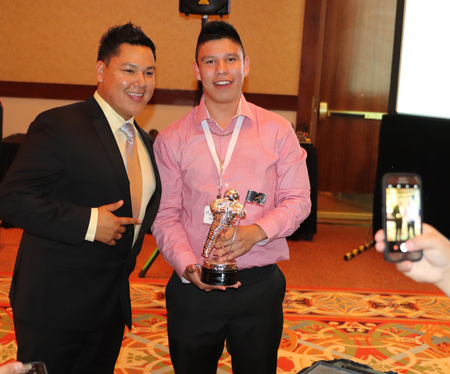 “I believe the youth in here, and many others across the country, are getting their education and getting that experience in business and economic development where they can have those voices at the decision-making tables,” said Jonathan Nolan, 27, from the Mississauga First Nation.

“Their voices matter there and they matter here,” he said. Nolan understands the importance of being heard, especially as he sits as the youngest member on the board of governors for Sault College, in Sault Ste. Marie, where he graduated from the Social Work program in April 2018. Now, he’s wanting to return to school and earn his Bachelor in Business. 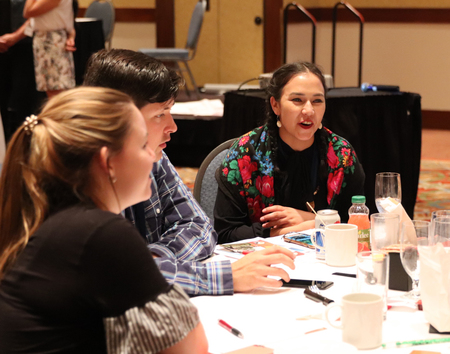 Cheyenne McGinnis, 25, says her job in commercial banking and relationship manager with BMO in Nanaimo, BC, has shown her the importance of listening to what people have to say. And here, she felt listened to.

“This has given me a chance to have a voice,” said McGinnis, who is a member of the Saddle Lake Cree Nation, but grew up on the Blood Reserve.

Cheyenne McGinnis (right) participates with her team case study as part of the Youth Summit.

“I think it’s really inspiring to see our next generation are pushing those boundaries and really taking risks and coming out of their shells here as Indigenous youth because they are beautiful and they are smart and their voices are important in this country,” she said.

Nolan and McGinnis were two of 59 delegates, ranging in age from 18-30 years, from across the country, both Indigenous – First Nations, Inuit and Métis – and non-Indigenous, brought together at the River Cree Resort on the Enoch Cree Nation west of Edmonton from July 22-26.

Delegates got the opportunity to listen to panels presenting on economic development, entrepreneurship and land-use; and to listen and learn from each other and senior Cando officials. 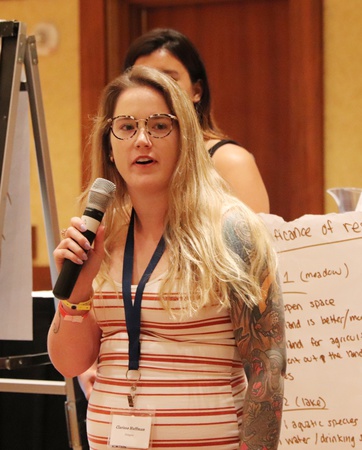 Clare Huffman, 26, a non-Indigenous participant, grew up in southern Ontario and knew little about the hardships faced by Indigenous peoples. So after earning her degree at McMaster University, she took a position as land use planner in Dawson City, Yukon. She’s been working there for a year and felt the summit was a chance for her to get a deeper understanding of life from the perspective of Indigenous youth.

Clare Huffman presenting with her team.

“There’s a lot of passion in this room. I think economic development in Canada is in good hands if this is the group of people that is going to be the future leaders of that field,” she added.

“Passion” is also the word used by Justen Peters, 23, member of the Okanagan Indian Band. This is his fifth economic development conference and he says this youth summit was by far the best. 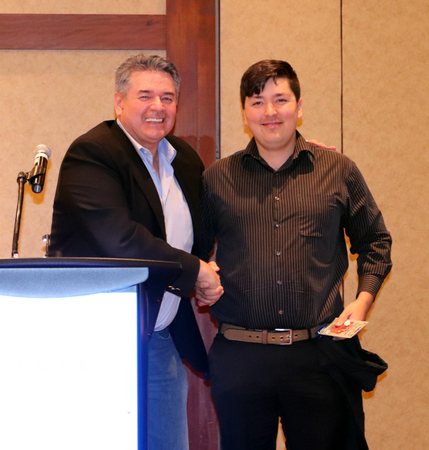 “The participants are passionate,” he said. Peters is working in Vernon as a research assistant with an economic development corporation founded by the OKIB. He has plans to study business administration at the Okanagan College although he has already completed two years in the arts track. “The participants have drive and they want to be involved with economic development.”

Not only have the delegates come away re-energized, but they have also come away with faith in Cando.

Pursuing positions as certified Cando Economic Development Officers have become career goals for Huffman, McGinnis, and Peters, while Nolan wants to ensure that First Nations have a say in businesses that start up in their communities.

“I would really like to see communities prosper and see the excitement of getting projects off the ground that are really relatable to the communities,” said McGinnis, who is confident serving as an EDO will allow her to do that. “It’s just about giving people a chance to have a voice.”

Delegates are hopeful that they weren’t the only ones to leave the summit empowered.

“I hope Cando sees that passion and they see that drive and they see us as worthy of investing in,” said Huffman. 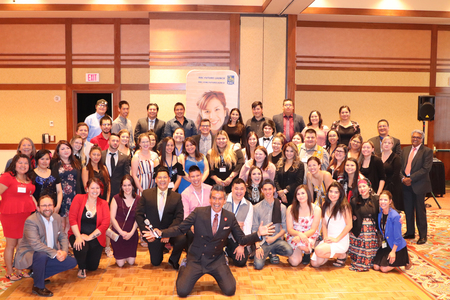 Stan Wesley, Youth Summit MC, hams it up with the delegates and sponsors from RBC, AECOM, Keyera and NRCan.