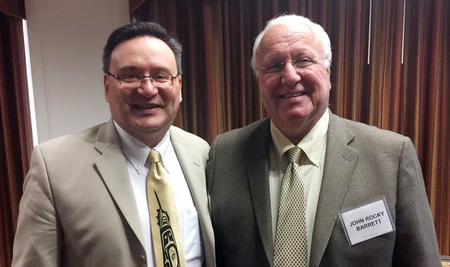 There is no greater building block, he says, than education, training and certification which organizations like the International Inter-tribal Trade and Investment Organization, Cando and the Canadian Council of Aboriginal Business can undertake to ensure First Nations have “the cutting edge capacity to know how to run their economic corporations.”

For First Nations to be successful, they must develop their economic corporations at arms-length from the band council.

“Chief and council should not be involved in every day operations and that’s still something that needs to be taught and prodded,” said Garnons-Williams.

But it’s catching on as newly and highly educated young people return to their reserves with business savvy. “They understand what good, sound, fiscal management is for a healthy, prosperous First Nation.”

After a First Nation corporation has successfully generated revenue for at least five years, then it can look at taking it to the next level: inter-tribal trade, which can mean either across provincial borders or into the United States.

“If you’re ready for a new market, let’s look at getting together with US Tribes,” said Garnons-Williams. He points out that US Tribes, as a whole, are ahead of Canadian First Nations economically because the tribes have been working with the US federal government for one hundred years longer than the First Nations in this country.

The next step in inter-tribal trade is to turn to academic leaders, an aspect that IITIO embraces.

“We gather together the world’s leading Indigenous economic leaders in the same room to look at these issues… what is the history of this, what does the law currently say out there in Canada, the United States and the provinces, and how can we best leverage this to make it go forward?” said Garnons-Williams.

These economic experts, he says, will discuss the issues, write research papers, and provide the solutions and options needed to move forward. 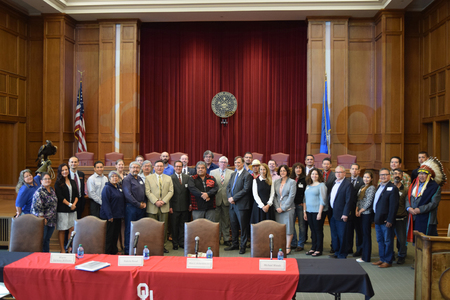 Group photo of the IITIO trade mission and conference at the College of Law, University of Oklahoma in June 2017.