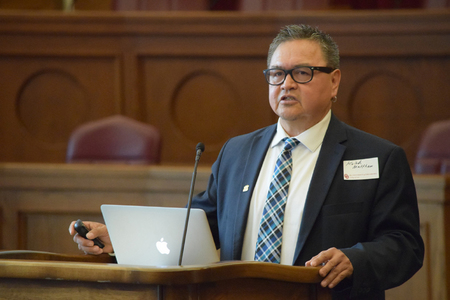 The potential for inter-tribal trade between First Nations in Canada and Tribes in the United States “is absolutely huge,” says business consultant Keith Matthew, who also serves as president of Cando.

But realizing that potential will not be easy as First Nations need to overcome the trade barriers that are in place between Canada and the U.S.

“We’re unfortunately at the whim of both of those governments,” said Matthew.

It is unclear how many First Nations are in the position of taking advantage of inter-tribal trade. Matthew says it’s a statistical analysis he will suggest his organization look at, especially in light of the “budding relationships” Cando has with the Assembly of First Nations, Metis National Council and Inuit Tapiriit Kanatami.

“That’s an issue not only ourselves as Cando need to look at, but all those other economic development organizations that want to help our communities, whether you’re First Nations, Metis and Inuit, understand the current situation. We need a good snapshot of where we’re at and we don’t have that,” he said.

Matthew says he would also like a “snapshot” of how Indigenous communities are operate businesses within Canada. There is no comprehensive list of who is conducting business, what they are doing, or who their markets are.

Matthew would also like to see more cooperation and less barriers between Indigenous businesses.

“(Cooperation) would be a welcome development in First Nation businesses, Metis businesses and Inuit businesses for sure. I would tend to say we’re almost, in a lot of incidences, competing directly with each other for much of the same market,” he said.

The establishment of something like an economic commission within each Indigenous community would offer the opportunity to find out how to take advantage of Indigenous businesses, economic development arms, and mutual beneficial agreements that are being signed within Canada.

“And then looking further abroad how do we take advantage of the tribes in the U.S. who want to do business with us? How do we facilitate this and make it real?” he said.

Matthew sees Cando as playing a substantial role in this development, serving as an “honest broker,” writing technical papers and examining the mechanics of making inter-tribal trade work for Canada’s Indigenous groups.