Improved Conditions on Reserves is tied into Economics 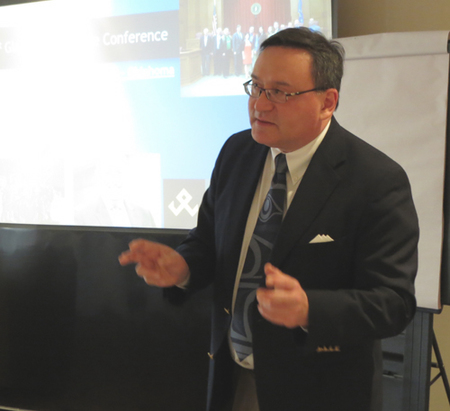 One way around that challenge, he says, is to allow trade between reserves, which are all under federal jurisdiction. But for that to happen changes would have to be made to the Indian Act, Income Tax Act, and Investment Act. Such changes would allow for greater advantages for corporations and individuals to set up businesses on reserve territories.

“If you’ve got that as an economic hub, with prosperous businesses in each hub, if you give a nation-to-nation hub without touching the provinces, could that out maneuver and not trigger interprovincial issues?” Garnons-Williams suggested.

“It would be an opportunity to turn that economic isolation into an economic positive,” he said, noting the concept is something his organization recently presented to the federal Standing Committee on Trade.
But for now IITIO is more actively involved in international trade, which is happening between Canadian First Nations and U.S. tribes.

There is great potential, he says, with the Citizen Potawatomi Nation, in Oklahoma, which has developed the designated foreign-trade zone Iron Horse industrial park. The FTZ provides Canadian Indigenous companies the opportunity to reincorporate under the laws of the CPN Corporation Act, establish themselves in the industrial park FTZ, then assemble, manufacture and export product. All the parts and manufacturing they import would be duty free, and when they export the product after it’s been manufactured in the FTZ, it is classified as one product at the end state.

“There are cost savings and economic incentives for being on CPN territory,” said Garnons-Williams, including the potential for the CPN bank to provide highly competitive low interest loans.

Iron Horse industrial park is now accepting tenants, he adds, and Canadian First Nations are looking.
It’s this kind of work led and undertaken by IITIO and other organizations like Cando and the Canadian Council for Aboriginal Business that will continue to help First Nations develop economically. And, recently, points out Garnons-Williams, who is excited about the potential, the Assembly of First Nations has a “renewed vigour” with its Chiefs Economic Development Committee.