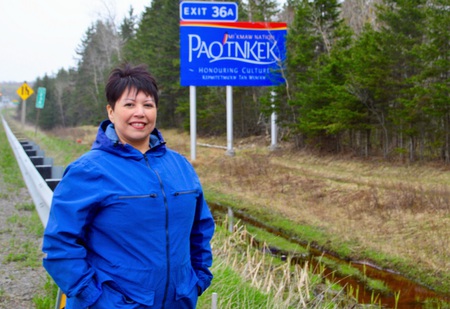 In the Mi'kmaw language, the word 'ilajugt'g' means 'to prepare', or 'be ready for'.

It describes perfectly what Rose Paul brings to the table in her position as director of economic development at Paqtnkek Mi'kmaw Nation, about 20 kilometres east of Antigonish, Nova Scotia.

Paul sees a bright future for her community, now that members are on the cusp of voting to transfer 27 hectares of land to the province. The transfer would pave the way for a $15 million diamond interchange, complete with two roundabouts, on and off ramps, connector roads and other improvements on the reserve.

More importantly, it means Paqtnkek can embrace the future with a new commercial development off the highway, similar to Millbrook and Membertou First Nations in Nova Scotia.

"It's been a dream of our community for many years," says Paul, a dynamic community leader and busy mother of eight children and grandmother to six. She served as Cando vice-president and director for Nova Scotia, Newfoundland and Labrador from 2010 to 2014.

"When the Trans Canada Highway was built in the mid-60s, it basically cut our reserve in half. There was no way to get off the highway to reach the undeveloped south side."

Now, after years of planning and detailed negotiations, and with the cooperation of the provincial and federal governments, 413 band members are eligible to vote on July 13th to take the next step. A 'yes' vote would mean construction on the highway project could start as early as this fall, and be complete within 30 months.

"We've worked very closely with our provincial and federal colleagues to make this happen," says Paul. "We also owe a debt of gratitude to those chiefs and council members over the years who refused to give up on their vision."

Paul has won many awards for her determined efforts to improve her community's economic situation: a Diamond Jubilee medal in 2013; Economic Development Officer of the Year (2010 and 2016) from Ulnooweg Development Group; and the Lieutenant Governor's Community Spirit award in 2013. She was also chosen as valedictorian in the 2011 Indigenous Women in Community Leadership program at StFX's Coady International Institute.

She recognized that education would be critical to her success, so she went to Harvard University for a certificate in negotiations training, and then completed her MBA in community economic development at Cape Breton University in 2015. She credits her time with Cando as being instrumental in strengthening her skillsets and vision for community leadership.

Rarely a day goes by without Paul using community meetings and social media to encourage youth in her community to pursue academic opportunities and trades training.

"For many years, Paqtnkek felt isolated from the local economy,"she says. "But now there are new opportunities on the horizon that all of our people can be prepared for. We can have a more prosperous future if we're willing to 'go for it'."

Would you like your project or community featured in an upcoming article?