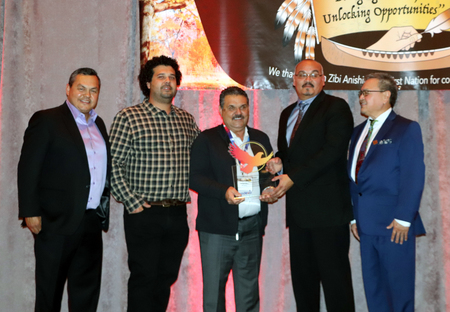 Frank Buckshot is proof a lot of hard work can take one a long way.

Though he has just a Grade 9 education, Buckshot, a member of the Kitigan Zibi Anishinabeg First Nation in Quebec, is a self-made successful businessman.

In fact, one of his businesses, Buck’s Auto Parts, took top honors in the Indigenous Private Sector Business category at this year’s Cando Conference.

Cando, the organization that promotes economic development in Indigenous communities across Canada, staged its 26th annual conference in Gatineau, Que.

The four-day event, which ran Oct. 27-30, included an awards ceremony to recognize winners in three categories.

Economic Development Officer of the Year and Community of the Year categories were also contested.

“It’s something I didn’t think I’d be able to achieve,” Buckshot said of his national award.

Heading into the conference Buckshot knew his company was one of the two finalists in the running for the Indigenous Private Sector Business award.

The other finalist was Supercom Industries, a business partnership featuring six First Nations in northwestern Ontario.

All of the finalists were given a maximum of 20 minutes to make a presentation, touting their accomplishments. Conference delegates who listened to the presentations were then able to vote on those they thought were most deserving to win in each category.

Buckshot had his daughter Amanda and son Andrew make the presentation on behalf of Buck’s Auto Parts.

“It meant the world to me,” Buckshot, who is 62, said of the fact his children spoke on behalf of the business. “They’re the ones that are going to take it over some day.”

This marked the first time Buckshot had attended the Cando Conference. And he was rather appreciative to be included in the awards presentations.

“I’d like to thank everybody involved in this project,” he said.

Buck’s Auto Parts has been operating on the Kitigan Zibi Anishinabeg First Nation since 2015.

But Buckshot has been involved in the auto parts industry much longer.

He previously owned Mani Pieces Plus, from 1997 through 2015, in Maniwaki, about one kilometre from his current business.

He sold Mani Pieces Plus so he could open Buck’s Auto Shop, right across the street from a successful sports store which he has been operating since 2006.

Buckshot also continues to run a seasonal brush cutting business, from May through October.

Buckshot believes the fact he provides quality service and that those customers spread the word is one of the reasons his auto parts and body shop is successful.

“It’s who you know all the time,” he said. “The best publicity is word of mouth.”

“More recognition,” he said, when he was asked what he thought the accolade might help achieve. “That’s what we’re hoping for.”

Buckshot said some of his customers travel great distances.

“I have a lot of customers from James Bay,” he said. “They have 10 Cree bands there. A lot of them come to Ottawa to shop and they have to pass through Minawaki. They don’t have very much up there. They live 1,000-2,000 kilometres away. Some of them drive 15-20 hours to get here.”

Buckshot believes there’s a rather simple reason why Buck’s Auto Parts has been a success.

“I think it’s the service we give,” he said. “People keep coming back.”

Buckshot added he believes the fact he is fluent in three languages – English, French and Algonquin – is a huge benefit when talking to his customers.

And he also thinks his cultural knowledge has played a huge role in his accomplishments.

“I think that for myself, having been born and raised in Kitigan Zibi Anishinabeg, the strong presence of our culture and cultural practices has been vital to my success in the business world,” he said. “Success in business relies on core values and principles like hard work, discipline, determination, and communication. These core values have been more a way of life for me as have they been simple business principles.”