The Grey Rock Entertainment Center is just one of the many ventures which make up the Grey Rock Power Centre on the Madawaska Maliseet First Nation in New Brunswick.

The Madawaska Maliseet First Nation is not resting on its laurels.

The First Nation, located a few kilometres from the New Brunswick city of Edmundston, has had numerous recent successful economic stories which have greatly assisted toward its goal of becoming self-sustaining.
And the First Nation has now received some national recognition for its local efforts. It was selected as the community of the year at the Cando Conference, which wrapped up on Oct. 25. The four-day conference was staged in Enoch, Alta.

“It’s clearly a great honour,” said Patricia Bernard, who has served as the Chief of the Madawaska Maliseet First Nation since 2013. “More importantly it’s exciting to see a small community like us succeed.” 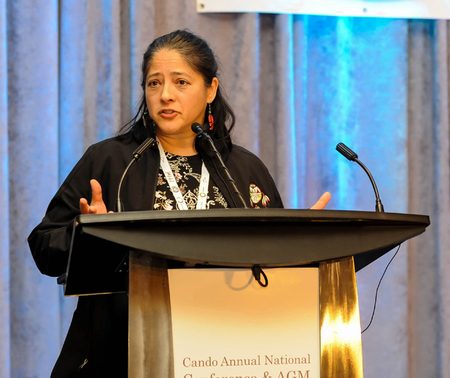 Chief Patricia Bernard accepted the award for Community Economic Developer of the Year.

Two finalists in each category made presentations at the conference. And then conference delegates voted on those they thought were most deserving of winning.

The other finalist in the community of the year category was Quebec’s Cree Nation of Mistissini.
Bernard said her First Nation’s victory was a bit unexpected.

The Cree Nation of Mistissini has been earning rave reviews for its efforts in becoming a year-round popular tourist destination.

As for the Madawaska Maliseet First Nation the most notable venture undertaken in recent years in the community was the building of the Grey Rock Power Centre, which opened in 2013.

The facility, mere minutes from the Quebec border and the border of the American state of Maine, has become the pride and joy of the First Nation.

The property, located next to the Trans-Canada Highway, includes a multi-purpose entertainment centre which features a casino and bingo hall as well as one of Atlantic Canada’s largest truck stops.

Several other businesses, including a food court and a Ford car dealership, are located in the centre.

A hotel and conference centre, located next to the casino, was expected to possibly be completed by the end of this year. But some delays have pushed back that expected opening until this coming spring. That facility will include 80 hotel rooms.

“People will be able to come and stay now,” Bernard said. “That will help out quite a bit.”
A Yamaha dealership, currently under construction, is also expected to be completed and open for business in the spring of 2019.

Though the Grey Rock Power Centre opened its doors five years ago, it was quite a bit before that that officials from the Madawaska Maliseet First Nation, which has about 550 members, started thinking about such a venture in their community.

“It’s been a long sort of vision for the community,” Bernard said. “Previous administrations have had this vision all the way back to the 1970s.”

The Grey Rock Power Centre is managed by the Madawaska Maliseet Economic Development Corporation. The CEO of the corporation is Bernard’s older sister Joanna, who had served as the First Nation’s chief for a decade up until 2013.

Joanna Bernard had been nominated for Cando’s economic development officer of the year. But she was not one of the two finalists who made presentations at the Cando Conference. Patricia Bernard, however, said her sister deserves plenty of praise.

“It was a beautiful conference,” she said. “It was nice to be on the Cree territory as well and to be so well received. I thought it was fantastic. I’m not an economic development officer myself but it was really exciting for me.”