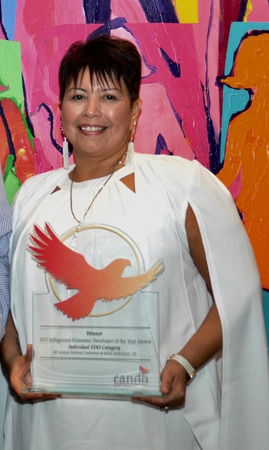 Rose Paul, the economic development officer for Nova Scotia's Paqtnkek Mi'kmaw Nation, was named Individual EDO of the Year at the 24th annual Cando Conference in Fredericton, NB in October 2017.

Members of Nova Scotia’s Paqtnkek Mi’qmaw Nation have plenty of reasons to smile these days.
And they can thank Rose Paul, the director of lands and economic development of their First Nation, for that.
Shortly after joining the First Nation’s administration department in 2006, Paul focussed her thoughts on the community’s need to have a highway interchange.

That’s because since the 1960s when Highway 104 (part of the Trans-Canada Highway) was built, the Paqtnkek First Nation was basically divided into half. The southern portions of the First Nation were not easily accessible and thus, not developed.

That is changing now though. In July of this year members of the community voted overwhelmingly to surrender parts of their land in order to have a highway interchange and connector roads built. This will allow both residential and retail properties to be built.

“It was a very long process, very difficult and a lot of barriers we had to go through,” Paul said.

In part for her continued efforts in making this deal become a reality, Paul was chosen to receive Cando’s economic developer officer of the year award. She was honored at the Cando Conference, held Oct. 22-25 in Fredericton, N.B.

During its annual conference winners were also chosen in Cando’s community of the year and Aboriginal Private Sector Business categories.

Cando delegates that attended the conference voted on the winners after hearing presentations from all of the finalists.

During her allotted 20-minute presentation, Paul included various slides about her First Nation and its long-anticipated project. She discussed the history of the venture and challenges faced along the way.
Meanwhile, the vast majority of those from Paul’s community were looking to develop the southern portions of their First Nation. A total of 277 ballots were cast in the land-surrendering deal and 265 of those were in favour.

The highway project is expected to cost $15.3 million. The First Nation will also receive more than $2 million in compensation for the use of its land and to move some families and reconstruct homes that will be affected by the project.

Paul believes eventually adding businesses and homes to the First Nation will be a win-win for all.
“It’s good to see my community feel better and to know we can improve the life of all of our members,” she said.

Construction on the highway interchange began in August. It is expected to be completed by the fall or winter of 2018.

Though she played an instrumental role in seeing the project become a reality, Rose said she is not the only one who deserves recognition.

“Somebody had to do the heavy lifting,” she said. “But it was the community working together with the leadership and government that helped this project stay alive.”

Paul also said the fact the highway interchange is becoming a reality now has proven to be a big boost to members of the First Nation, who have visions of starting up their share of businesses.

“People are thinking about how they can be entrepreneurs now,” she said. “A lot of people are coming forward wanting to do their own businesses.”

By winning Cando’s EDO of the year award, Paul helped Nova Scotia register a sweep of the accolades up for grabs at the conference.

Green Leaf Enterprises, from the small Nova Scotian community of Wilmot, took home the Aboriginal Private Sector Business award while Glooscap First Nation, also based in the eastern Canadian province, was named community of the year. 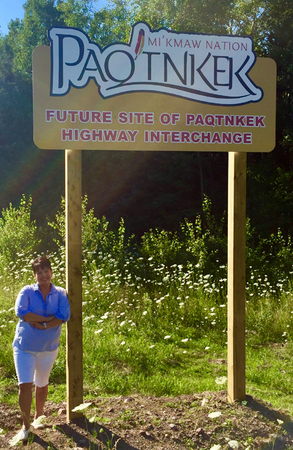