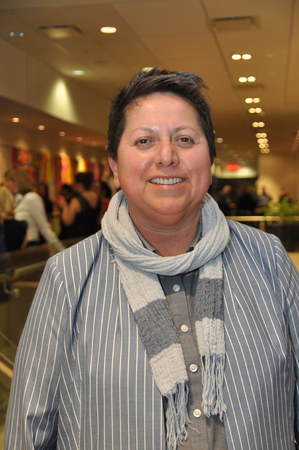 Lynn Francis, the Director of Economic Development for the Elsipogtog First Nation, led a management team which successfully brought a pharmacy and grocery store to the community.

A never-give-up attitude paid off handsomely for Lynn Francis.

For the past 20 years Francis has been employed by the Elsipogtop First Nation in New Brunswick. She’s spent the last nine of those years working as the First Nation’s Director of Economic Development.

In her current role Francis spent countless hours spearheading a project that had been talked about for almost 15 years. After years of waiting patiently to see what would happen, the Elsipogtog Commercial Development Centre, a facility with three tenant spaces, became a reality last October as a pair of businesses opened their doors.

One of the stores is a Pharmasave, the first location of this nationwide pharmacy chain which is owned and operated by a First Nation.

River of Fire Market, a 10,000-square foot grocery store, is also located in the centre.

Details of what business will be occupying the third rental space have yet to be officially announced. But the hope is a tenant will be in the venue in the near future.

Francis was in charge of a management team which kept the project alive all these years, despite numerous obstacles.

“I’m very proud of the work we did, along with the support of the Chief and council,” she said.

For her dedicated efforts, primarily with the $10 million centre which opened last fall, Francis was one of the four nominees for Cando’s individual economic development officer of the year.

This list was then cut down to two finalists, which included Francis. Finalists in this category, as well as the Aboriginal Private Sector Business and community of the year categories, were then invited to the Cando Conference, held Oct. 22-25 in Fredericton, N.B.

After hearing presentations from all of the finalists, Cando conference delegates then voted on the winners for all three categories.

Rose Paul, from Nova Scotia’s Paqtnkek Mi’qmaw Nation, ended up winning the top EDO category.
Francis was still rather upbeat despite not winning her category.

“When I heard there were over 300 EDOs in Canada I thought it was quite the achievement to come in second,” she said.

Francis added attending the Cando Conference was a rather enlightening experience for her.
“It was good to hear what other EDOs are doing,” she said. “And by allowing them to share their best practices, we could see if we could get that for our communities.”

For Francis, this marked the first time she had attended Cando’s annual conference. She herself had received her Professional Aboriginal Economic Developer (PAED) certification through Cando back in 2007.

Francis and her management team maintained its quest for the Elsipogtog Commercial Development Centre despite numerous changes within not only their only council but provincial officials as well.

“Each government pushed it forward step by step,” she said.

The new businesses are employing about 50 Elsipogtog residents. And it has improved the mood of citizens from the First Nation.

“To see our community members working, and for them to have meaning and purpose, you can’t really explain that,” Francis said.

The numbers of locally employed individuals are obviously expected to rise when a third tenant is added to the community’s centre.

“We are still looking at different business cases,” Francis said. “We’re hoping to have something by the end of the year. We want it open as soon as possible.”