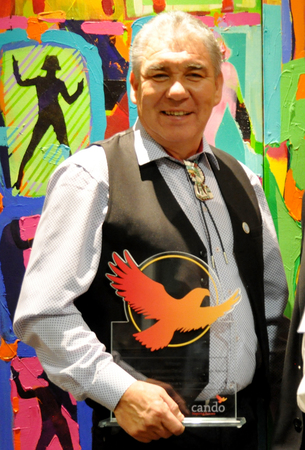 Nova Scotia’s Glooscap First Nation has made some giant strides in recent years.

“For such a young community, we have come a long way,” said Chief Sidney Peters, who has held his position since 2012.

The Glooscap First Nation, which was only established in 1986, has undergone tremendous growth under Peters’ leadership.

In fact, thanks in part to various successful ventures the First Nation has captured some national recognition. Glooscap was chosen as Cando’s community of the year.

Glooscap captured this accolade following a vote of delegates that attended the Cando Conference, staged Oct. 22-25 in Fredericton, N.B.

“I’m happy of course and excited about it,” Peters said. “It’s nice to see your peers recognize all the efforts you have put in. Sometimes you don’t think how much time you’ve put into it.”

Glooscap currently has 375 members. About 100 of those live on the First Nation.
“We’re a small community,” Peters said. “But we have big dreams.”

Peters said he didn’t feel out of place at the Cando Conference, even while seeing others from much larger First Nations discussing projects in their own communities.

“I felt comfortable there,” he said. “What I liked about it was people were coming up to me and telling me how happy they are with what we have done.”

Peters believes having a progressive council and a qualified and dedicated staff has resulted in recent growth on his First Nation.

While Peters was the one who made the presentation about the Glooscap First Nation at the Cando Conference, he said many others deserve credit as well.

“A lot of it goes back to our staff and our community,” he said. “We had community backing.”

Recent expansion on the First Nation includes a highway commercial development named Glooscap Landing. The first phase of this project, which is now open, features a gas bar and convenience store.

A Tim Hortons franchise will also be included in the mix in the near future.

“They have also worked to expand our commercial fisheries through increased access to the lobster fishery along with a new state of the art vessel,” he said.

And the Glooscap First Nation is not resting on its laurels. Shortly after Glooscap Ventures was created, officials from the First Nation established a five-year action plan and a 10-year strategic plan in the hopes of growing further.

Peters said being named community of the year by Cando will not affect any of these plans.

“There’s still stuff in our strategies we need to focus on,” he said. “It’s just a matter of prioritizing it.”

Peters added those in his First Nation know they are on the right path, not only because of praise they are receiving but also becoming of the number of others who want to work together.

“It just shows you what we’re trying to do seems interesting,” he said. “More and more people want to partner with us.”