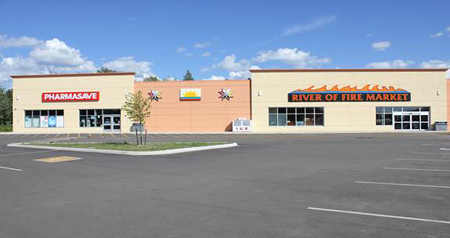 New Brunswick's Elsipogtog First Nation now has its own pharmacy and grocery store in its community.

There had been talks. And then more talks. And even more talks. But Chief Aaron Sock of New Brunswick’s Elsipogtog First Nation admits he had become skeptical whether a business centre would ever come to fruition in his community.

Sock, who is in his sixth year of serving as chief in his community, admits he was overwhelmed when the Elsipogtog Commercial Development Centre opened last October. The facility includes space for three businesses.

Two of the tenants who opened their doors last fall were River of Fire Market, a 10,000-square foot grocery store and Pharmasave. The latter is the first pharmacy in the nationwide chain owned and operated by a First Nation. The third, yet-to-be-announced tenant, is expected to occupy its space in early 2018.

“It’s been a long process, 14-15 years in the making,” Sock said. “It had gone through four of my predecessors.” For keeping its dream alive and persevering despite various obstacles in its pursuit of a multi-store centre, the Elsipogtog First Nation has been recognized.

It is one of five nominees for this year’s Cando community of the year. Winners in this category, as well as in the individual economic development officer and Aboriginal Private Sector Business categories, will be honored this fall at the Cando Conference in late October in Fredericton, N.B. Sock said he couldn’t believe the community dream finally became a reality.

“It’s kind of surreal actually,” he said. “To be quite honest, I didn’t think I’d see this day. My reaction was almost neutral – I didn’t think it was actually happening.” Sock is thrilled that the majority of those from his First Nation do not have to venture out of town to buy many of their essentials now.

“It means that our dollars are being spent in the community now as opposed to outside,” he said. Sock is hoping the business centre will spawn further growth. “Going forward, we’re looking to continue the trend of establishing more businesses in the community,” he said.