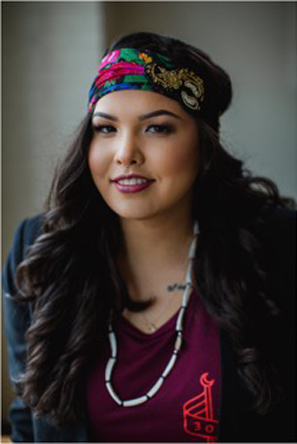 A lifelong passion for beading has turned into a profitable venture for Heather Dickson. The 26-year-old Whitehorse resident had graduated from the Fashion Design program at the Art Institute of Vancouver in 2010.

In the spring of 2015 Dickson, a Tlingit and member of the Carcross/Tagish First Nation, combined her traditional and arts skills to launch her business Dickson Designs. The company, which has become a huge success story, is one of the four nominees for this year’s Cando Aboriginal Private Sector Business award.

Winners of this accolade, as well as those in community and individual economic development officer categories, will be honoured at the annual Cando Conference, set for late October in Fredericton, N.B.

“It was a hobby that turned out to be a business,” Dickson said of her time-consuming venture these days. The Dickson Designs product line includes the popular Granny Hanky Headbands. These headbands sold out rather quickly at a recent Whitehorse festival Dickson participated in.

In fact, the demand for her headbands has grown to the point where Dickson now employs as many as 10 First Nation women across the Canadian north to help her produce beaded designs. Dickson sells her products online to customers across Canada and the United States. Her clients often send her photographs of her apparel being worn throughout the world.

“Our work gets to travel to places we know we’ll never get to,” she said. “We’ve got selfies from all over the world.” Dickson is also passing on her sewing and beading passions to others. She has taught sewing classes to children and has also shared her skills with others during various festival workshops.

Dickson said she had her share of doubters when launching her business.

“Most think starting a business in the north, where we often feel so isolated and small, would be a barrier,” she said. “But it’s actually been the backbone of my business. It’s where I have received the most support and it’s the people from the north that I fully credit for helping my business grow as fast as it did.”