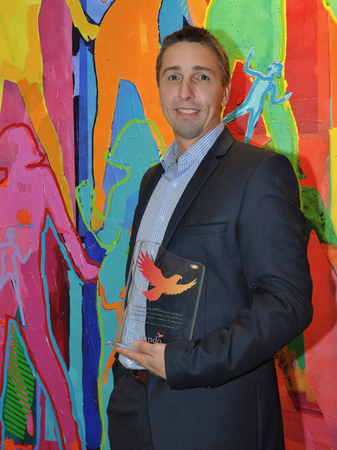 Donald Hanson is hoping First Nation communities across Canada start utilizing Lucid, the band management software system he created. For his efforts his company was a finalist in 2017 for Cando’s Indigenous Private Sector Business award.

A band management software system that he created is earning an Indigenous man some cross-country praise.

Donald Hanson, who is Mi’kmaq and a member of the Membertou First Nation on Cape Breton Island, is the creator of Lucid.

The software system was designed to support First Nation communities and organizations across the country. Its aim is to increase their transparency and accountability, thus enhancing their over-all effectiveness.

“It’s transparent and easy to follow,” Hanson said of the software system, adding that is why the name of the product is aptly called Lucid. “That’s the whole idea of the system.”

Partly because he created Lucid, Hanson was the finalist this year for Cando’s Indigenous Private Sector Business award.

Green Leaf Enterprises, a business located in the tiny Nova Scotia community of Wilmot, ended up winning the award in this category.

The winner and finalist were selected at the Cando Conference, which wrapped up on Oct. 25, in Fredericton, N.B.

Since launching Lucid in April of this year, Hanson has convinced communities or groups from six provinces - Nova Scotia, New Brunswick, Ontario, Saskatchewan, British Columbia and Quebec – as well as the Northwest Territories to sign up for his pilot project. He will offer the software for free for a three-month period in the hopes users will purchase the service afterwards.

“There is a lot of people looking to get this type of service,” he said. “There is a need and I want to fill it.”
Hanson had previously worked for more than a decade in federal civil service. His desire to create a system such as Lucid stemmed from the fact he often witnessed the impact created from a lack of a proper management framework.

“Communities I worked with in the past had the best intentions,” he said. “But I’ve seen the need for something like (Lucid) and I understand it.”

Hanson was also thrilled to be singled out for his venture by Cando.

“It was a real honor and a privilege just being nominated which sounds a bit cliché but true nonetheless,” he said. “It is very re-affirming to know that my peers see the value of the Lucid system enough to nominate me for this prestigious award from a nationally recognized organization such as Cando.”

And he was not the least bit upset he was named the finalist instead of being chosen the winner in his category.

“Coming second is still a great accomplishment considering it was in all of Canada,” he said. “Besides, when you consider the duration and milestones that the winner achieved I am proud to come in second.”

Hanson was also pleased he was able to showcase his project in front of a national audience.

“This gave me a unique opportunity to present my business to the key stakeholders in all regions and help increase the awareness of my product,” he said.

And the response he received was quite positive.

“I have been overwhelmed with the amount of positive feedback from the conference attendees with many of them saying how needed this type of system is for our communities and how many of them identify the potential synergies which can be developed as a national tool,” he said. “Many of the EDOs see my vision and how Lucid provides the basis for increased capacity for economic growth.”