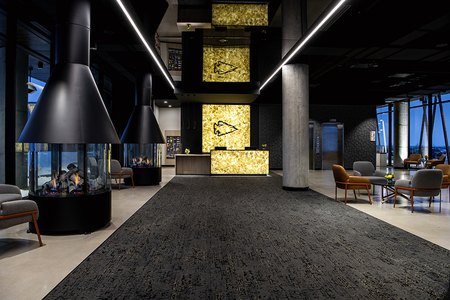 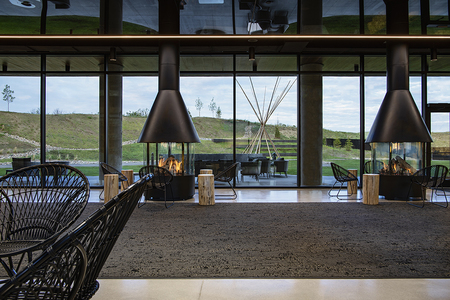 The Dakota Dunes Resort is just one of the ventures of the Whitecap Development Corporation, the economic arm of Whitecap Dakota First Nation.

Officials with the Whitecap Dakota First Nation are certainly not resting on their laurels.

Representatives from the First Nation, based in Saskatchewan, are constantly working to better and further develop several initiatives which will provide numerous benefits to its members.

Back in the spring of 2004, Whitecap Dakota was thrust into the spotlight when it opened its spectacular Dakota Dunes Golf Links course to the public.

The course earned rave reviews from its inception and continues to do so.

In fact, one of the sport’s most respected magazines, Golf Digest, selected Dakota Dunes as the best new Canadian course for 2005. That accomplishment signified the first time any course in Saskatchewan had been recognized with any sort of award from Golf Digest.

The course continues to be included on various lists which compile the top golf facilities across the country.

The Whitecap Dakota First Nation has also been applauded in various circles for its casino which opened in 2007 as well as its Dakota Dunes Resort, which opened its doors to the public in the fall of 2020.

Balkwill said several new initiatives are being planned for the First Nation.

“There was a tourism master plan developed back in 2012,” Balkwill said.

That plan included various initiatives Whitecap Dakota officials were hoping would come to fruition during the next 20 years.

“We continue to try to pick off some of these projects, one by one,” Balkwill said.

The Dakota Dunes resort, a seven-story facility which includes 155 guest rooms, was one of the ventures in the First Nation’s master plan.

Balkwill added Whitecap Dakota representatives have now turned their attention to constructing a thermal spa, patterned after Scandinavian spas, on its lands.

“We are in the design phase right now,” Balkwill said. “And then we will start construction in 2023.”

Balkwill is hoping the First Nation’s spa will be completed and ready to start welcoming visitors by some point in 2024 or the following year.

“It’s a fairly large investment,” Balkwill said, estimating it will cost about $40 million to build the spa. “There is nothing really like it in Saskatchewan.”

Balkwill added Quebec currently has several thermal spas. But they are rare in western Canada.

“There are a couple in B.C., one in Alberta and one in Manitoba,” he said.

“It can also double as a larger entertainment centre,” Balkwill said of the rink, which could potentially see construction begin as early as 2024.

The facility would include seating for 1,500-2,000 spectators, which would allow First Nation reps to host some even larger concerts than it currently is able to.

Other future plans include adding retail opportunities on the First Nation as well as a residential development, which would feature approximately 300 units, including condos, townhouses and single-family homes.

Balkwill said corporation officials are constantly focused on having profitable and sustainable developments.

Balkwill added Whitecap Dakota has become a regional employer because the First Nation, which has about 600 members, does not have enough residents to fill all of the positions required at its current ventures.

Balkwill praised the First Nation’s leadership team, led by Chief Darcy Bear. He has served as the Whitecap Dakota chief since 1993.

“He’s very driven,” Balkwill said. “Once he gets the mandate from the community, we try to be fairly aggressive with our projects and developments.”

Besides having its own businesses, including its golf course, casino and resort, the Whitecap Dakota First Nation is also a partner in several other ventures.

For example, the Whitecap Development Corporation owns 50 per cent of Whitecap Commercial Real Estate. The other half of this venture is owned by those in construction, engineering and electrical sectors within Saskatchewan.

The Whitecap corporation also has a division called Whitecap Industrial Services, providing assets to resource, oil and gas, utilities and pipeline sectors. The First Nation has various partners involved in this venture.

The Whitecap Dakota is also one of the seven First Nations which comprise the Saskatoon Tribal Council (STC). As a result, it has been part of various STC partnership initiatives, including real estate holdings.

It seems only fitting one of the country’s top Indigenous economic development conferences will be staged at one of the premier Indigenous resorts in Canada.

The 2022 Cando Conference is scheduled to be held May 16-19 at the Dakota Dunes Resort, located on the Whitecap Dakota First Nation in Saskatchewan.

Cando is the national organization that promotes Indigenous economic development across Canada.

This year will mark the 28th annual Cando Conference. The majority of those conferences have been held in person. But because of the pandemic, the last in-person conference was held in October of 2019 in Gatineau, Que.

Cando organized a virtual conference in October of 2020.

Cando officials were hoping to hold the 2021 event this past fall at the Dakota Dunes Resort. But because of the ongoing pandemic, that event was push back until this May, in the hopes a full in-person conference experience can be had.

The Dakota Dunes Resort, which opened in October of 2020, has been earning rave reviews from its visitors.

“We really try to make sure that everyone in our hotel leaves with a sense of awe and is treated with an unforgettable authentic Indigenous experience,” said Alex Fleischhacker, Dakota Dunes Resort’s area director for sales and marketing.

“They have a beautiful view of the Dakota Dunes Golf Links course and you get to see the sprawling hills of the dunes,” Fleischhacker said. “Or you get the river valley view. If you look, you can actually see the South Saskatchewan River valley from your room.”

All guest rooms feature a stunning headdress image of Whitecap Dakota First Nation Chief Darcy Bear, who was appointed to the Order of Canada in 2020.

The Dakota Dunes Resort is billed as an ideal location to stage conferences or meetings. The facility can also be enjoyed by those wishing to visit the adjacent casino, which opened in 2007, three years after the First Nation’s golf course started welcoming visitors.

Guests have also been flocking to the Dakota Dunes Resort to take part in one of its Indigenous adventures, including Dakota culture and history, or simply to have a relaxing getaway.

“I don’t think there is a resort experience that you can go to presently in Saskatchewan which will give you the same experience,” Fleischhacker said. “You kind of get to pick your path a little bit. I think there’s something there for everybody.”

Elements key to Indigenous spirituality are prevalent throughout the Dakota Dunes Resort.

“When you walk into our doors, you’ll see that a lot of those elements throughout the hotel,” Fleischhacker said. “So, we have a lot of earth, a lot of fire, a lot of air. And they all kind of meet together in our hotel.”

“When you walk through the lobby, there’s lots of windows with lots of great natural light,” she said. “We have our fireplaces in the lobby to make that warm and cozy feeling. And then you’re going to see lots of natural types of elements throughout the hotel.”

Some of the symbolistic elements are prevalent throughout the facility. For example, angular designs, which represent tipis, are a common sight.

“We walk through the corridor and there’s river rock to symbolize Whitecap Dakota First Nation building their First Nation alongside the river valley,” Fleischhacker added.

The resort also features a suspended, handcrafted canoe that was shipped in from Montreal.

“It’s a beautiful centerpiece to a hallway,” Fleischhacker said.

As for dining experiences, the Dakota Dunes Resort includes its own restaurant, the Moose Woods Home Fire Grill.

“We really try to have that farm to table feel,” Fleischhacker said. “There’s a lot of local producers that we source from. We go to the farmers produce every weekend and get fresh produce. And we source local venison, local beef, local bison, lots of different local foods are sourced here.”

Darrell Balkwill, the CEO of Whitecap Development Corporation, the First Nation’s economic arm, said the resort was the latest part of a 20-year master development plan.

Balkwill said that master plan was developed a decade ago, in 2012.

“We continue to try to pick off some of these projects, one by one,” said Balkwill, who first joined the Whitecap Dakota First Nation to serve as its director of economic development in 2003.

Future facilities that are being planned include a thermal spa and an arena featuring two ice pads.