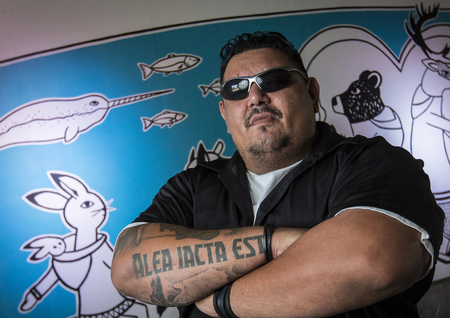 Jay Odjick will be one of the youth alumni panelists at this year's Cando Conference.

It will certainly be a different experience this time around for Jay Odjick as he once again participates on the National Youth Panel at the Cando Conference.

Odjick, a member of Kitigan Zibi Anishinabeg, a First Nation in Quebec, was on the inaugural youth panel held at the 2005 Cando Conference, staged in Sault Ste. Marie, Ont.

As for this year, all of those on the panel are previous participants. They have been invited back to talk about how their careers have progressed since their last appearance at the conference.

Because of the pandemic, however, this year’s conference will be a virtual one. For starters, there will be a two-day segment on Oct. 20-21. And it will then continue again Oct. 27-28.

The alumni youth panelists will make their presentations on Oct. 27.

Odjick, who is now a writer, artist and television producer, has fond memories of his first Cando Conference.

“It was pretty awesome,” he said. “At the time it was something new to me and business was new to me.”

Odjick recalls that back in 2005 he had already self-published three issues of a comic book series. Attending the Cando Conference and hearing various other Indigenous people talk about their ventures inspired him to keep at his craft of writing and drawing comics.

But Odjick said he wasn’t necessarily interested in all of the advice that was being thrown his way when he was a young entrepreneur.

“I had grown so tired of non-Indigenous people say go for some grant money because there’s all this Indigenous grant money,” he said. “That kind of offended me.”

Odjick did end up applying for a grant but one that was open to everybody, not just those who are Indigenous. And he also secured a small business loan.

As a result, he was able to launch his business, Darkwing Productions, which produced comic books called The Raven and featuring the character KAGAGI.

Odjick then took his character to Arcana Comics, which managed to get his works into comic books stores throughout North America.

Then, KAGAGI: The Raven, a graphic novel came out a few years later. But the character wasn’t done then as Odjick founded a production company and was the executive producer for KAGAGI, an animated series which ran in Canada on the Aboriginal Peoples Television Network for three seasons.

The series was also shown on stations in the United States and Australia.

Odjick also branched out in recent years. For example, he taught a comics and graphic novels course at the University of Ottawa. And he also worked as a freelance writer and had his articles published in the Ottawa Citizen.

Odjick has also received rave reviews for working on a pair of books with renowned children’s author Robert Munsch.

For starters, Odjick illustrated the Munsch book titled Blackflies, which came out in 2017. The pair teamed up again and in 2019 released another book called Bear for Breakfast.

Both books are set in a First Nation community. But that location is purposely not mentioned in either book.

“The idea is we wanted everybody to feel represented by it,” Odjick said. “We didn’t want others to feel left out if we mentioned one community.”