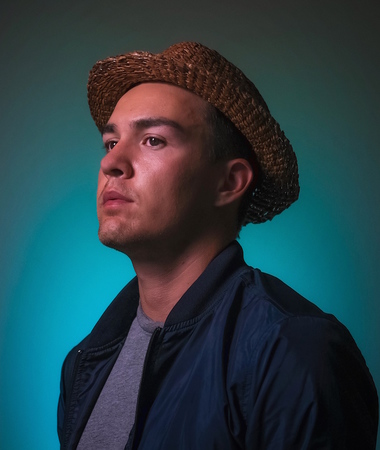 Ryan Oliverius sat down and wrote a list of goals he wanted to achieve back in 2013 when he began his post-secondary studies.

But he quickly forgot about his wish list, which included to one day become a member of council for his First Nation, the Okanagan Indian Band, located in Vernon, B.C.

Oliverius, who graduated with a Business Administration degree from Thompson Rivers University in 2017, recently found his wish list from years ago and was surprised to see he had fulfilled a certain goal.

Oliverius, 28, was voted in as a councillor for his First Nation this past April. He’s the youngest member on the council, which includes a chief and 10 councillors.

“When I found my vision board recently and saw that I had written I wanted to one day be on chief and council it was pretty surreal,” he said.
Oliverius’ political career began somewhat earlier than he had anticipated.

“To be honest, I didn’t know if I was ready,” he said of his councillor post. “But I was nominated for it. And a lot of people from the community were telling me I should do it.”
Oliverius is also looking forward to representing the Okanagan Indian Band this fall. He’s one of six individuals named to the national youth panel, which will participate in the Cando Conference, scheduled for Oct. 27-30 in Gatineau, Que.

“I think it’s an amazing opportunity for my community and my Nation,” Oliverius said. “I’m excited I’ll be learning and seeing some of the people that are in the economic development industry in their communities.”
Besides attending weekly council meetings, Oliverius is also on three council-appointed committees.

Since this past April he’s also been working as the communications co-ordinator for the Okanagan Nation Alliance, comprised of the Okanagan Indian Band and seven other nearby First Nations.

All his new responsibilities have forced Oliverius to put his own business on hold. He started Salish Steel Metal Art, a First Nations metal arts business, upon graduating from university.

“I was getting a lot of orders for different products I have on my page,” he said.

But he hasn’t much time since April to focus on his business.

“It’s still there,” he said. “But I haven’t had that much time to make art. Next year though I want to get back into it.”