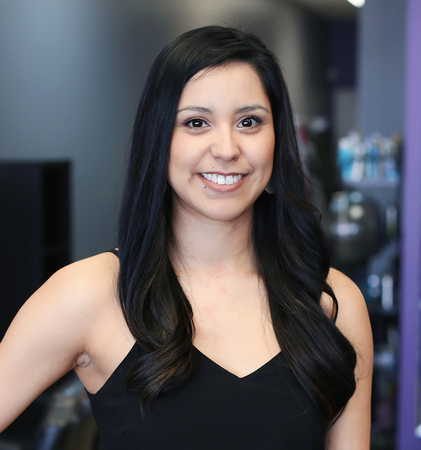 Early on in her work career Destinee Peter was presented with an interesting offer.

Peter was 21 when she was approached by the then owner to buy the Regina hair salon business she was working at.

“She was going to close the doors,” Peter said of her former boss.

Peter, a member of Saskatchewan’s Carry The Kettle Nakoda Nation, had some understandable hesitation with the proposition.

“The whole time I was thinking oh my gosh this is a big step,” she said. “But I was there all the time and basically helping to run the business anyways. I sat down with my dad and talked about it. I used up all my savings and decided to do it.”

It took a few months to finalize the paperwork for the deal in 2013. But shortly after her 22nd birthday Peter was running the show.

Now 28, Peter continues to be the owner and operator of the thriving Tangles Hair & Beauty Salon. Her business now employs seven other female hairstylists, including five Indigenous ones.

Peter’s business success has also landed her a spot on the national youth panel, which will participate at the Cando Conference, set for Oct. 27-30 in Gatineau, Que.

Peter is looking forward to the conference, organized by Cando, which promotes Indigenous economic development across Canada.

“It feels good to have somebody recognize me for my work,” she said. “And I’m excited about the conference and just want to learn and take in as much as I can.”

Since she owns her business, Peter also sets her work hours. That’s come in handy of late as she has a one-year-old son, Theo.

To spend more time at home, Peter only works from 9 a.m. until noon from Monday through Thursday. And then she has 9 a.m. to 5 p.m. shifts on Friday and Saturday.

“I wasn’t too sure if I was going to be able to do it,” Peter said of her juggling act of parenthood and her lessened work schedule. “But it’s worked out.”

Peter’s business continues to expand. Last fall she bought a laser hair removal machine. This procedure now accounts for about 20 per cent of her business.

Besides possibly opening a second store, Peter is also looking to purchase a Microneedling machine, which helps with skin conditions like scarring.