Pursuing Well-being: Lessons from the First Nation Poverty Action Research Project Report is being shared at an important time in our history, as we come to grips with achieving reconciliation. How do we support First Nations in their search for the achievement of a good life in all its dimensions? This plenary session reports on a multi-year project that has linked an academic team from across Canada and the University of Arizona with the Assembly of First Nations. The Project Team has worked with five First Nations from different parts of Canada in the development of strategic plans to advance community health and well-being, and to assist in the implementation of those plans. This session will outline the key insights derived from the project, as illustrated by work in two of the First Nations.

Fred Wien has an Honours B.A. in Political Studies and Spanish from Queen’s University, and an M.A. and PhD. in Development Sociology, Government and Latin American Studies from Cornell University. He served as Director of the Maritime School of Social Work at Dalhousie University from 1981-86. Between 1992-96, Dr. Wien served as the Deputy Director of Research at the Royal Commission on Aboriginal Peoples where he headed the research program on employment and economic development. With Marlene Brant Castellano, his work for RCAP also included the development of Volume 1 of the Commission’s Final Report (Looking Forward, Looking Back). At the national level, he has served as a member and chair of the Advisory Board for the Institute of Aboriginal Peoples Health (IAPH/CIHR). Along with John Loxley and Cindy Blackstock, he led the research program into the funding of First Nation Family and Childrens’ Services agencies, leading to the Wen:de series of reports as well as to the development of Jordan’s Principle. He is the Nominated Principal Investigator for a major research grant from CIHR for the project: “A Poverty Reduction Approach to Improving the Health and Well-being of First Nation Communities in Canada”. He is also the NPI for a CIHR-funded project on “Building a Social Policy Framework for the Health and Well-being of Mi’kmaq Communities in Nova Scotia”. At the request of Mi’kmaq and Maliseet organizations, this research has been extended to the Maritime provinces with a focus on social assistance policy on reserve. He has also co-chaired (with Dr. Rod McCormick) the national Aboriginal Health Research Steering Committee which made recommendations to CIHR about support for Indigenous health research in Canada. He holds a professor emeritus appointment at Dalhousie University, and was made a Member of the Order of Canada in December 2015.

Jeff Beaudry is proud member of Brunswick House First Nation and is a Policy Analyst in the Economic Sector at the Assembly of First Nations.  Throughout his career, Mr. Beaudry has had the opportunity to provide policy and research support in the Environment and Health Sectors on a number of files including, species at risk, food insecurity and more recently, agriculture. In his role within the Economic Development Sector, he is committed to working hard to assist in the many opportunities that exist for First Nations by continuing to advocate for improved economic policy, programs and services.

I have been married for 30 years to my wife Laureen Weget. I am from the St’at’imc Nation and reside in the community of T’it’q’et. We have 7 beautiful children, and 6 grandchildren, who are Gitxsan and St’at’imc. I have served my community of T’it’q’et for 12 consecutive years in leadership. Presently, I am working for the Ucwalmicw Centre Society as a manager. The Ucwalmicw and Amlec are in partnership and aim to provide the community of T’it’q’et food security, self sufficiency, and independent as our ancestors once lived. The Ucwalmicw Centre is a not-for-profit society; which provides an opportunity for people who have an interest in horticulture to train and learn hands-on experience. Amlec is in partnership as a business to sell produce and generate revenue back into the project and to create more job security within the community. Presently, the community is in the developmental stage for greenhouse growing. This project is important to the community because of climate change, and we need to adapt. Being a part of the poverty action group has had its rewards, and from the paper the academics have done up points towards economic development. As a people, we have gone through a lot and I believe our ancestors have passed down then strength and resiliency and we will succeed.

Warren Weir is the Academic Administrator of Vancouver Island University’s Cowichan Campus, Duncan, BC. He has worked with and for a number of colleges and universities and specializes in Aboriginal organization and management, FN education, and Indigenous community economic and small business development. He is an active member of the Council for the Advancement of Native Development Officers, is a member of its Education Committee and also serves as the managing editor and member of the editorial board for their journal - the Journal of Aboriginal Economic Development.

Yvonne Marie Ballantyne was born in Toronto, Ontario. She moved back at the age of 2 years old to Camperville, a small Metis community situated on the west shore of Lake Winnipegosis that is the home where her mom Diane and Dad Delphis were born and raised. Diane went to elementary Catholic Day School from Grade 1-7 and went to Winnipegosis Collegiate from Grade 8-10 and continued her education after moving to Grand Rapids located on the north shore of Lake Winnipeg where the Saskatchewan River enters the lake.  Diane has two children, Roberta and Lenny and 8 beautiful grandchildren who are her everything.  Diane has 1 achievement that stands out for her. Each Frontier School Division acknowledges one person to receive Outstanding Contribution Award to recognize the candidate for their good. For Diane, she assisted with all the fundraising that went on in her school. The Award was presented to her in 1994.  Diane was elected on Band Council in 1982-86 and then again in 2014 – present. Diane is not afraid of challenges, always willing to learn and help in any way she can.  Some of Diane’s past occupations include: school bus driver, member service rep - Median Credit Union, member service rep - Canada Post, ambulance driver / attendant, commercial fisher since 2010, and PARP volunteer since 2015. 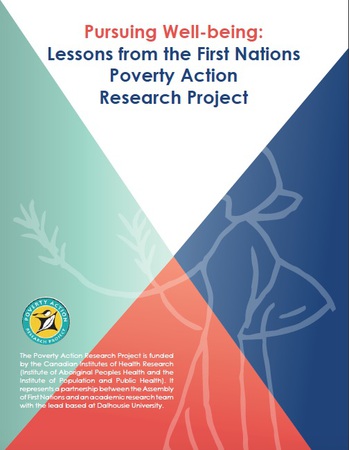 The Poverty Action Research Project is funded
by the Canadian Institutes of Health Research
(Institute of Aboriginal Peoples Health and the
Institute of Population and Public Health). It
represents a partnership between the Assembly
of First Nations and an academic research team
with the lead based at Dalhousie University.

Download a PDF file of the
Poverty Action Research Project!