Dakhl’awèdí (Eagle Clan) and Kùkhhittàn (Raven Child Clan) are two of many clans that the Yukon First Nations have. The Eagle symbolizes grace, power, and has great intellectual abilities. The Eagle is a sacred, wise and noble creature representing power and prestige to the Yukon First Nation’s. The gift the Eagle shares is the ability of foresight, and an indication of good times to come.

In many stories the Raven teaches us about life and right from wrong. The Raven symbolizes change in life, creativity, and humor. A key figure in Yukon First Nation’s legends, the Raven is involved in many creation stories and is also recognized as the bringer of light as it is said that the Raven released the sun and moon.

The Eagle is represented here by the panel to the left and the Raven is illustrated as he crosses the Yukon River.

The mighty Yukon River is shown to reflect the history that Yukon First Nation’s people have with the land and the water. The Yukon River also represents the relationship that was built with other First Nation’s and “outsiders” or non-indigenous people as they established trade routes with them in partnership.

Throughout the history of the Yukon, it’s inhabitants have prospered by trading and working together. Only through collaboration and partnership have the people survived and thrived to build a Territory that is culturally rich and diverse. 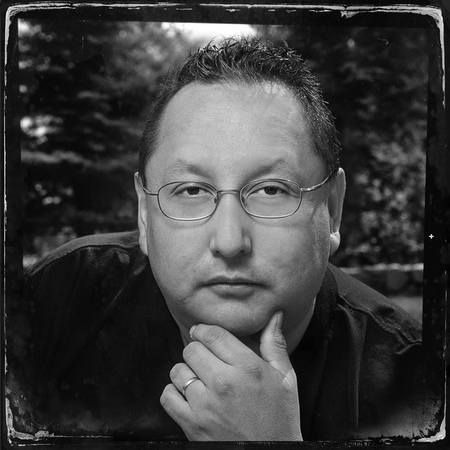 Mark is Anishinaabe (Ojibway, Wolf Clan) who was born in Red Lake, Ontario, Mark grew up in Toronto where he received a Design Arts Diploma from Seneca College in 1996, and went on to earn his CGD™ Certification from the Graphic Designers of Canada. Mark founded Mark Rutledge Design most recently and has worked with many First Nations and Fortune 500 companies throughout his 20-year career.

Mark Rutledge believes strongly in sharing knowledge, and has lectured and volunteered his time and expertise to business associations, students and to professional designers throughout Canada.

Mark (Tenna ‘Tsa ‘Teh) Master of the Copper
Was born in Dawson City, Yukon Territory. He is of Tlingit and Irish ancestry and presently travels
extensively into British Columbia and Yukon to market his work.
About his art, Mark states: ‘when I think about what art is, it is more than illustration or objects to be doted over. Art is the magic the glue that binds and brings us together. It is the language that transcends its forms. Art gives us a reason to think, to ponder and speak our minds.
Two ravens
www.jewelry.freehosting.net
ravenshieldstudio@hotmail.com