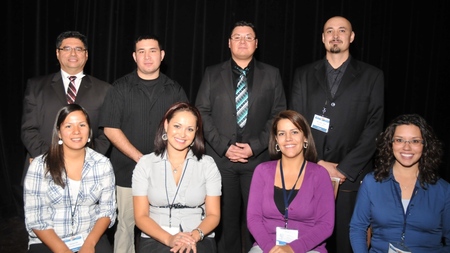 In an effort to highlight Aboriginal youth initiatives and successes, Cando's Annual National Conference & AGM features a National Youth Panel. This event features Aboriginal youth who are pursing and speaking their ways of success in areas of education, working within the field of Aboriginal economic development and/or as individual entrepreneurs. The panel allows youth from across the country to showcase their talents, achievements and to talk about their challenges, strengths and the support they have received while working hard for the benefit of their people.

This year, youth shared their personal stories and discussed the challenges and barriers they have faced in order to reach their goals. Each panelist contributed tremendously not only through their presentations but also through their willingness to interact with the captivated audience during the plenary session. Following the panelists’ presentations, delegates honored the youth for their courage and determination in presenting their stories to the audience.

Learn more about the National Youth Panel and past Youth Role Models.

Tausha Esquega is currently an Economic Development Officer for Kiashke Zaaging Anishinaabek (Gull Bay First Nation) in Ontario, and is dedicated to the betterment of her home community through economic development. Her journey to success began through her commitment to education and volunteerism. In 2004 she completed her Native Community Worker – Child and Family Diploma at Sault College and subsequently completed her Bachelor of Arts Degree in Community Economic & Social Development at Algoma University in 2008. As a student, Tausha was an active member of the Shingwauk Anishinaabe Students Association. The annual Youth Symposium, which highlights Aboriginal education and career success, was originally initiated by Tausha and continues to be one of Algoma University’s most valuable events. Tausha’s commitment to her family, friends and community are truly remarkable and continues to be a driving force. With her Community Economic and Social Development degree and Technician Aboriginal Economic Developer certificate, she thrives to achieve excellence in all of her pursuits. Recently, Tausha was selected to participate in the Indigenous Youth Gathering at the Vancouver 2010 Winter Olympics and was also the recipient of the Algoma University 2010 Alumni Achievement Award.

Melanie Jacobs graduated with her Bachelor of Arts in Indigenous Studies with a Specialization in Indigenous Management & Economic Development in June 2010. She has been employed full-time as a Market Analyst with Crane Aboriginal Management Services (CAMS) since 2008, and also worked on a contract basis with CAMS prior to being hired as a full-time employee. Melanie’s love for community economic development began when her application to join the Curve Lake Economic Development Committee was accepted, despite the fact that she was only a first year university student at the time. Melanie’s interest in community economic development was further recognized when she was selected to represent Curve Lake at the Assembly of First Nations National Youth Symposium in Winnipeg, MB. Notably, Melanie developed the guidelines, application, and approval process for the Curve lake Community Gaming Revenue Fund, a framework for the utilization of Casino Rama Revenues. She was also the founding administrator for the Ontario First Nations Economic Developers Association (OFNEDA). Although CAMS keeps her extremely busy, she also works part time administering the Curve Lake Community Gaming Revenue Fund

Delby Powless, Six Nations of the Grand River, ON

Delby Powless attained an Associate’s Degree in Sociology from Rutgers University where he was a two-time All-American Professional. Powless was drafted first overall by the Buffalo Bandits in the 2004 NLL entry draft. During his five years with the Bandits, Powless has totaled 201 points and helped the Bandits to an NLL championship in 2008. Delby won the Tom Longboat Award as the top Native Athlete in Canada in 2003. He also won silver medal at the World Indoor Lacrosse Championships with Team Iroquois in 2003 and again in 2007. Recently, he won a Major League Lacrosse championship in 2009 with Toronto Nationals. Delby is the current head coach of the Men’s lacrosse team at Hagersville Secondary and has led Hagersville to four straight Ontario Championships. Delby is also a young inspired entrepreneur who owns and operates Powless Lacrosse Store located on the Six Nations Reserve. He continues to strive for the best and inspires other youth to go the distance.

Rob "Kasp” Sawan grew up in East Vancouver and by the age of 9, had witnessed more trauma and abuse than most grown adults will confront in a lifetime. As a result of multi-generational trauma and abuse brought upon his family and community from the residential school era, he grew up in and out of the child welfare system and eventually ended up in group homes and spent time living on the street. Kasp grew up living in the dysfunctional cycle of alcoholism and drug abuse and turned to his music as a way to escape and deal with his harsh reality. He eventually moved from Vancouver and became part of a crew which developed, wrote, produced, and marketed their own music and went on to win numerous prestigious awards that gave him national recognition. Kasp has struggled with his own personal issues, yet he continues to learn, grow, share and inspire through his music and story. He balances his personal, family, and career life through honesty and commitment. Kasp’s focus has shifted his music to a whole new level and he shares it with youth to motivate them to persevere no matter what happens in life. Kasp is dedicating his life to his family, his community and his people to show the youth that there is hope for a better today and brighter tomorrow.

Vanessa Tait recently obtained a Bachelor of Commerce (Honours) degree with a major in Aboriginal Business Studies from the University of Manitoba. While attending university, Vanessa was involved in the Aboriginal Business Education Program, where she served as a student advisor. She was also appointed President of the Association of Aboriginal Commerce Students at the University of Manitoba after serving for a year as a Treasurer. Through her university experience, Vanessa was able to understand her identity as a Cree woman. After her exposure and participation in many traditional ceremonies, Vanessa proudly received her spiritual name of "Stands with the Wolf Woman.” Vanessa also learned of the importance of balance – the physical, mental, emotional, and spiritual. Together, a strong balance and education are able to complement one another and for Vanessa, these principles have helped her to accomplish her goals and achieve the success that she has. Undoubtedly, Vanessa has been and continues to be a role model for youth who plan to further their education. Her personal and educational success illustrate that through hard work and commitment, anything is possible.

Massey Whiteknife is a member of the Mikisew Cree Nation and has resided in Fort McKay, AB for over 12 years. He is the President and sole owner of Iceis Safety Consulting Inc., Iceis Industrial Supplies Inc., and Tatonka Welding and Mechanical Ltd. He is a Nationally Certified Construction Safety Officer and a certified Safety Auditor with the Alberta Construction Safety Association (ACSA). Through Iceis Safety Consulting Inc., Massey has developed Safety Programs for numerous businesses and on many industry sites within the Regional Municipality of Wood Buffalo. In addition to the numerous safety certification tickets, Massey has also completed a year of Business Administration with Athabasca University. In 2009 Iceis Safety Consulting Inc. developed the "Get Ready Program” a safety certification program aimed at boosting the employment participation rate of Aboriginal people and sub-contractors in the Oil and Gas Industry. Massey has an optimistic view and is a positive role model for today’s youth. He is passionate about being a spokesperson for small Aboriginal businesses and to help them partner with larger corporations and connect with industry.