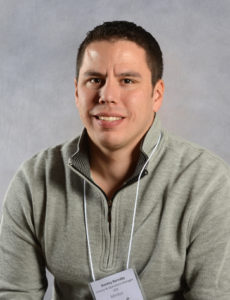 Stanley Barnaby speaks highly of his Cando certification which has helped him land jobs.

Taking some specialty courses during his post-secondary education has paid off handsomely for Stanley Barnaby. The 28-year-old, who is from Quebec’s Listuguj Mi’gmaq First Nation, attended the University of New Brunswick, earning his Bachelor of Business Administration degree.

While at UNB, Barnaby also took the necessary courses to obtain his First Nations Business Administration Certificate. By fulfilling the requirements for this certificate Barnaby met the criteria to obtain his Technician Aboriginal Economic Developer (TAED) certificate through Cando, the national Indigenous organization which promotes economic development. Barnaby credits his Cando certification with helping him land some of the jobs he has held.

“It certainly helped me with some of the employment I’ve had in my career,” he said. “It being on my resume really helped.”

Barnaby is currently the Finance and Operations Manager for the Joint Economic Development Initiative (JEDI), based in Fredericton, N.B. JEDI promotes Indigenous economic and workplace development to 15 First Nation communities throughout New Brunswick. Barnaby started off as the finance intern at JEDI two years ago before he was promoted to his present job, one in which he oversees numerous ventures.

“I play a strategic role on a lot of the projects at JEDI,” he said.

Besides community economic development, JEDI provides services including entrepreneurship, apprenticeship and employment counselling to Indigenous individuals. Before joining JEDI, Barnaby held a pair of jobs in his home community. He was a financial analyst in commercial fisheries, working for the Listuguj Mi’gmaq Governement for one summer. And he gained finance experience working for the Mi’gmawei Mawiomi Secretariat, also in Listuguj. Barnaby continues to speak highly of Cando.

Barnaby’s involvement with Cando continues to expand. For starters, he’s the chair of Cando’s National Youth Summit Conference. And he’s also a member of Cando’s national conference committee. JEDI will be co-hosting the Cando Conference this fall along with the St. Mary’s First Nation. That conference is scheduled for Oct. 23-26 in Fredericton.

Barnaby is also a strong believer in giving back. He recently completed a mentorship through the Cape Breton University in-business program. Through this venture he assisted Indigenous youth from across Atlantic Canada to complete assignments covering topics such as finance, accounting and marketing.