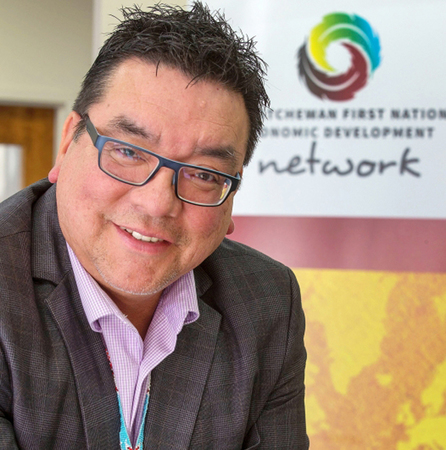 Milton Tootoosis has achieved his share of successes during his professional career.

Tootoosis, who lives in Saskatoon, had graduated with a Bachelor of Arts degree in Indigenous Studies from the First Nations University of Canada back in 1985.

For just over 10 years now he’s been working as the director of livelihood and economic independence for the Office of the Treaty Commissioner (OTC) in Saskatoon.

His duties include initiating partnership projects that go hand-in-hand with the OTC’s mandate.

Since 2009 Tootoosis has also had his Professional Aboriginal Economic Developer (PAED) certification through Cando, the organization that promotes Indigenous economic development across Canada.

“I think it has helped me tremendously,” Tootoosis said of his Cando certification. “I’m not a technician. I don’t write business plans. But I have the framework to write a plan now.”

Tootoosis, who is 56, also believes having Cando certification on one’s resume enhances character.

“It adds a little more credibility,” he said. “And it show we’re not just a bunch of yahoos running around. We have tools and templates and structured thinking.”

Tootoosis added having his Cando certification enabled him to believe more in himself.

“It gave me a lot more confidence,” he said.

That confidence helped Tootoosis accomplish a career highlight in his professional life. In 2016 he was the chair of a committee which hosted the World Indigenous Business Forum in Saskatoon.

Tootoosis added having PAED certification is something he takes seriously.

“As a PAED professional, I have some standards to live up to,” he said.

Cando stages an annual conference where its members meet to listen to various presentations and share ideas. The conference location rotates to various parts of the country each year.

Tootoosis has periodically attended Cando conferences during the past two decades. And he was at the 2018 conference, held in Enoch, Alta.

“The highlight for me was hearing the research of the accomplished Dr. Manley Begay Jr.,” he said. “He’s a good friend of mine.”

Since early 2012 Tootoosis has also served as the co-chair of the Saskatchewan First Nations Economic Development Network.

Plus he’s been a board member of the Indigenous Leadership Development Institute Inc. since March of 2006. This Winnipeg-based group founded the World Indigenous Business Forum.

Tootoosis is also the tournament director of the annual Lawrence Weenie Cup. This Indigenous hockey event, which was founded in 2000, honors Tootoosis’ father who died in 1999.

The Lawrence Weenie Cup, staged each year in North Battleford, Sask., has become one of the best Indigenous hockey tournaments in western Canada.

Tootoosis also finds the time to serve as a Headman (councilor) for his Poundmaker Cree Nation. He was elected to a four-year term to the council in May of 2016.

The Poundmaker Cree Nation, located near the town of Cut Knife, is about a two-hour commute from his current home in Saskatoon.