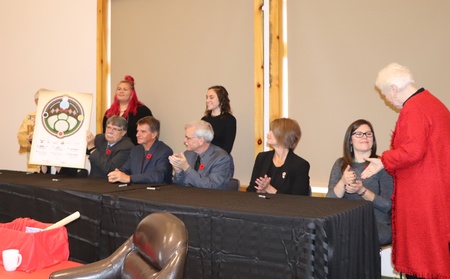 A pair of First Nations from central Ontario were among a half dozen partners who joined forces to sign a Friendship Accord.

Laurie Carr and Emily Whetung, the chiefs of the Hiawatha First Nation and the Curve Lake First Nation, respectively, were two of the individuals who signed the accord called Ezhi-Wiijikiwendiyang.

In Anishanaabemowin this term roughly translates into ‘How we are friends.’

The signing of the accord was held on Nov. 2 at the Lang Pioneer Village in Keene, Ont., located near Peterborough. 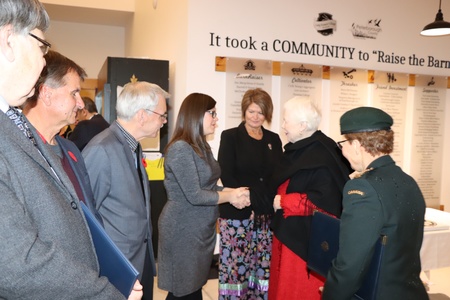 By signing the accord, the partners agreed to work collaboratively on various fronts, including economic development ventures.

“We can come up with some projects that we might not have come up on our own,” Carr said.
Whetung echoed this sentiment.

Though the Friendship Accord was officially signed in early November 2019, the six partners have been meeting frequently since 2016 to build stronger relationships and discuss projects that would benefit all.

Keith Knott, the former chief of the Curve Lake First Nation and a recent appointee to the Order of Canada, was among those who also attended the Friendship Accord signing.

“This accord is a modern-day accord,” he said. “It’s not like a treaty. This is a step forward for us.”

Knott is a firm believer all partners need to focus on what lies ahead and not worry about what has happened in their pasts.

“We must start looking forward – seeing where the horizon is and seeing what is beyond the horizon,” he said. “

If this type of thinking is properly applied, it can translate into various ventures coming to fruition.”

“If there’s a project out there, how can we work together to make it a reality?” Knott asked.

The signing of the Friendship Accord was held in partnership with Cando (Council for the Advancement of Native Development Officers) and the Federation of Canadian Municipalities (FCM) as part of the First Nation-Municipal Community Economic Development Initiative (CEDI). CEDI is a program that promotes economic development collaboration between Indigenous communities and municipalities across Canada. The program is funded by Indigenous Services Canada. 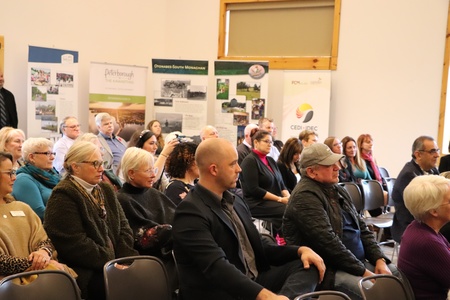 CEDI Program Officer Josh Regnier, of FCM, believes having six partners collaborating, at a regional level, has increased potential for outcomes for the communities involved.

“It shows a regional approach has just that much more oomph,” he said.

CEDI Program Coordinator Tanya Tourangeau, of Cando, is among those who believe the Friendship Accord could be precedent setting.

“This partnership definitely demonstrates how to be good friends,” Tourangeau said. “And they wanted to set an example for everybody else.” 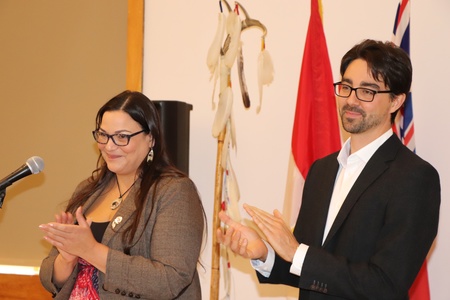 The Lieutenant Governor of Ontario, Elizabeth Dowdeswell, who attended the Friendship Accord signing, believes many similar agreements can also be forged across Ontario and the rest of Canada.
“There’s no question it can be built elsewhere all across this province,” she said.

Lawrence felt the agreement was signed at a timely moment, shortly after the recent federal election, which resulted in a Liberal minority government and plenty of talk of a fractured country.

“It sets an example for our entire country how we can come together for the betterment of our country,” Lawrence said.