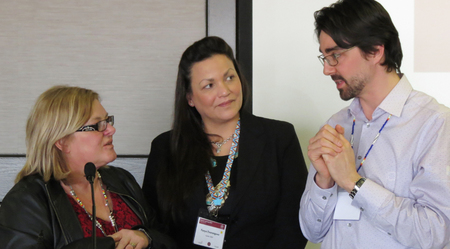 One of the many successful partnerships from CEDI Phase I is that of Lac Seul First Nation, Kitchenuhmaykoosib Inninuwug First Nation and the Municipality of Sioux Lookout. Together, the three communities embarked on a journey to address the high cost of food and food security for remote northern communities in Ontario. Leadership decided to work collaboratively together utilizing guiding principles of a Friendship Accord to lead them. As a result of a feasibility study and extensive stakeholder consultation and engagement, plans for a regional food distribution (RDC) warehouse to serve northern communities from the Sioux Lookout airport began to materialize. A preliminary report of the RDC project was published June 2017. It is intended that the RDC will service 31 remote communities, with the possibility of expanding to providing access and reduced costs for healthcare related products.

Given the participatory approach to the feasibility study of including other First Nations and the inclusive approach Sioux Lookout took towards developing its own 2020 economic development strategy, stronger partnerships have been created in the region resulting in the creation of a regional business hub in Sioux Lookout for surrounding First Nations and a labour market group. This initiative is co-chaired by Lac Seul and Sioux Lookout, both of whom are now working jointly with mining, construction and health sector stakeholders. Next steps for the partnership include creating economically sustainable communities by having Economic Development Zones, rather than urban reserves, in Sioux Lookout. 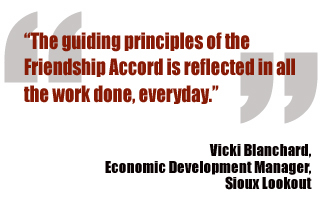 Vicki Blanchard, Manager of Economic Development for Sioux Lookout presented the partner’s dynamic story of friendship, collaboration, support and communication at the Indigenous – Local Government Partnership Forum. The story of their journey was very inspirational and a model for others to learn from.