The Alberni Clayoquot Regional District, located on Vancouver Island BC, submitted an application to the Community Infrastructure Partnership Project in October 2016. The application was submitted with the support of the Huu-ay-aht First Nation in order to receive support on a collaborative solid waste plan. The partnership grew to include the Huu-ay-aht village of Anacla and the communities' government businesses, as well as the Bamfield Marine Sciences Centre.

The collective goal of the project was to combine services for efficiency and reduced costs, to overall improve services received by all residents, potential local job creation and ultimately, to move toward a region wide Zero Waste System.

The partnership has most recently finalized and will soon be publishing two Request for Proposals (RFPs), one for a solid waste hauler and a second for an attendant to supervise two transfer stations as well as provide education to citizens on recycling. The communities currently do not divert organics but hope to introduce this in the near future.

Bamfield Director Keith Wyton presented on behalf of the Alberni Clayoquot Regional District about the partnership's current status and next steps, which include drafting service agreements between the partnerships as well determining a fair cost-sharing formula. 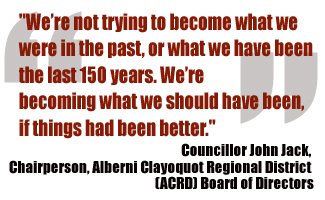 John Jack, councillor for Huu-ay-aht First Nation and Board Chair of the Alberni Clayoquot Regional District spoke about his role with both the Indigenous local government and the regional district, as well as about Treaty Negotiations in the territory that brought them to implement a self-government system in April 2011. Following this, Huu-ay-aht joined the Alberni Clayoquot Regional District as a member in 2012. John also addressed some current challenges faced by the First Nations in the region and felt optimistic about a future working in collaboration with the Regional District in a way that will benefit all. 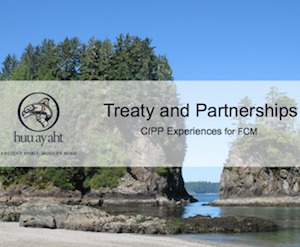