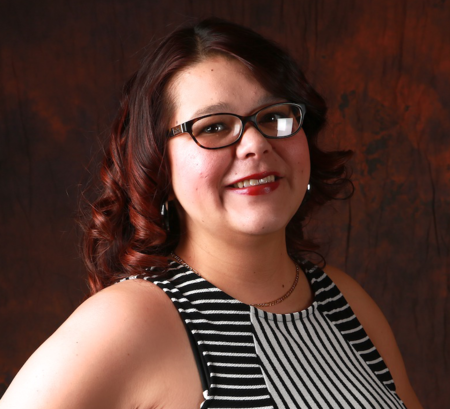 Courtney Bear, a member of Manitoba's Peguis First Nation, is currently pursuing her Master's degree at the University of Winnipeg.

Courtney Bear is keen to make a difference.

The 33-year-old, a member of Manitoba’s Peguis First Nation, is currently pursuing her Master’s degree via the Development Practice program from the University of Winnipeg.

“I know the importance of education,” she said. “It will help me be successful.”

Bear, a mother of six children ranging in age from eight months to 17 years old, eventually wants to work with Indigenous people who have experienced hardship.

Bear certainly knows what that is all about.

“I’ve overcome many barriers and hardships in my life being an Indigenous person,” she said.
For starters, Bear’s father was murdered when she was just one. Her mother was then forced to singlehandedly raise not only her but her 10 other siblings as well.

Bear grew up in the Manitoba city of Selkirk.

“That was one of my barriers as I faced racism living in a predominantly white community,” she said. “And growing up my mother didn’t have a lot of income.”

Although Bear was keen to pursue higher education, a lack of funds prevented her from doing so upon her high school graduation.

After working for a few years Bear did return to the classroom, earning a family support worker certificate, following a one-year program, at Manitoba’s Red River College.

Bear’s educational pursuits also saw her graduate last year with a Bachelor of Arts in Criminal Justice and Conflict Resolution from the University of Winnipeg.

Since she was juggling her family life and work at the same time, it took Bear six years to complete the four-year undergrad program.

She is now in the first year of her Master’s program. And she’s getting some assistance in this pursuit from Cando, the national organization that promotes Indigenous economic development.

Bear is one of three recipients this year of a Cando scholarship through the National Indigenous Economic Education Fund. Each scholarship is worth $2,000.

“I felt privileged and honoured that I was one of the chosen applicants,” Bear said.

Helping others is already something that Bear does naturally. For example, she said an elder approached her recently as she needed help in acquiring a transit pass.

“I helped her with the application,” Bear said. “It just felt right when I helped her. It was on my own personal time and had nothing to do with my education or work.”

Bear eventually wants to be employed by an organization where she can put her post-secondary education to work. She feels a holistic approach with a focus on culture, oral teachings, ceremonies and finding balance is the best method.

“I have a strong believe in my cultural aspects,” she added.

And she also believes she can be an influential role model and assist many others.

“I just want to work with people,” she said. “I know in my heart I can pass on plenty of experience.”