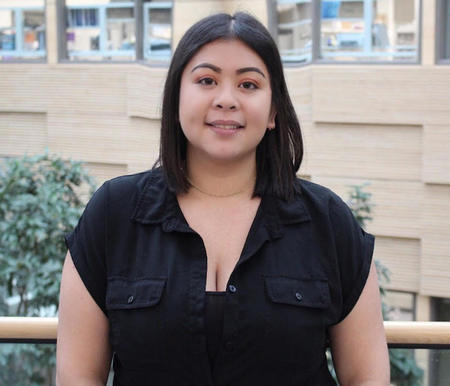 Taylor Wilson is in her second and final year of the Master’s in Development Practice program at the University of Winnipeg.

That’s the attitude taken by Taylor Wilson, who’s in her second and final year of the Master’s in Development Practice program offered at the University of Winnipeg.

The program, which focuses on Indigenous development, is a costly one as tuition is $22,000 per year.

It’s also why Wilson, a member of Manitoba’s Fisher River Cree Nation, sought out as much financial assistance as she could.

A year ago she was fortunate to be one of the three recipients of a National Indigenous Economic Education Foundation (NIEEF) scholarship. Each winner received $2,000 via Cando, the organization that promotes economic development in Indigenous communities across Canada.

Despite winning the scholarship in 2018, a guidance conselor at the University of Winnipeg suggested to Taylor to send in another application this year.

As it turned out, the 25-year-old was once again selected as one of the three scholarship recipients for 2019.

“I was surprised to win it again,” she said. “I was encouraged to apply again but I was told not to get my hopes up.”

Taylor will be recognized at the Cando Conference, which will be held Oct. 27-30 in the Quebec city of Gatineau.

Taylor has a rather good inkling of where her NIEEF scholarship money will go.

“It’s probably going towards my tuition,” she said. “My program is one of the most expensive grad programs in Manitoba.”

Taylor added the money she’ll receive does indeed come in rather handy.

“Scholarships help out a ton,” she said. “Not only is tuition expensive but going to school takes up a lot of time. It basically is a full-time job.”

Because of the time commitments required for their studies, Wilson added many post-secondary students simply do not have the availability to have even a part-time job during the school year.

Wilson had previously graduated from the University of Winnipeg in 2016, with a Bachelor of Arts in Cultural Anthropology and Conflict Resolution.

And she’s also planning to continue her education after earning her Masters. She’d like to go on and get a PhD, potentially becoming a professor who mentors Indigenous students.

Taylor said she’s considering applying to various universities in Canada for her PhD program. Plus she’s also thinking of continuing her studies in either Australia or New Zealand, two countries she visited this past summer.

If she chooses not to head to a faraway country, Taylor said she might also look into programs offered at American schools.

“There’s a lot of options on the table,” she said.

But she’s not certain if she would seriously consider heading south of the border.

“It’s a little closer to home,” she said. “But I’m still unsure if I would want to go to school in the U.S. right now given their current political climate.”