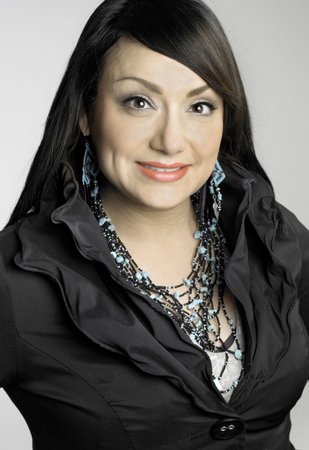 Nicole Robertson has dedicated her life to creating awareness about Indigenous Peoples through the media. Her career has taken her all across Canada: directing, producing, and reporting on issues that affect Indigenous communities.
Her work experiences include working with the Aboriginal Peoples Television Network (APTN), the National Aboriginal Achievement Awards (Indspire), A- Channel, Global, CBC and CTV.

In 2002, Nicole created and established "Muskwa Productions & Consulting”, which specializes in communication advisory services that include; media and public relations, media training, event & video production, and communications strategies. Ms. Robertson’s company was recognized through the Alberta Chamber of Commerce’s Business Awards in 2009 as the "Aboriginal Woman Entrepreneur Award of Distinction.” The award recognizes the outstanding achievement by an Aboriginal woman entrepreneur who exemplifies effective leadership, innovation, and a commitment to enhancing the well being of the larger Aboriginal community. Nicole Robertson is profiled in a book, entitled, "Phenomenal Female Entrepreneurs”, published by Second Story Press (2013).

The Cree Entrepreneur is the National Chair of the Aboriginal Women in Leadership National Council through Women in Leadership Foundation that assists First Nations, Metis and Inuit women in advancing and creating opportunities in leadership roles. For the past two years, Nicole has shared her expertise and knowledge with the First Nations Women’s Economic Security Council through the Province of Alberta.