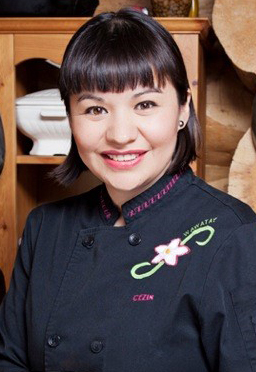 Cezin is an Algonquin woman, born in Rapid Lake, raised in the Parc de la Verendrye, QC. She comes from a long line of strong Anishnabe First Nation women, who all have contributed to the proud hard worker she is today. These women have also taught her the traditional cooking skills that she now incorporates into Wawatay Catering.

One of Cezin’s visions is to improve the health of people, especially First Nation people, through the revitalization of true Anishinabe cuisine which would lead to people making healthier food choices leading to a healthier life style.

Cezin has a diploma in culinary Management from Algonquin College and has acquired work experience in restaurants, but nothing ignited her passion like the challenge of starting her own business.

Cezin quit her full-time employment in 2011 and with the support of family and friends, and the help of her spouse’s credit card, she built her business from ground up. In just a few short years, Cezin has been featured as a culinary artist for Michäelle Jean Foundation "Art Saves Lives Campaign” in 2012, she received 2013 Rising Star Ottawa Entrepreneurship Recipient Award, published recipes for the Origine Nord Ouest – Tout L’monde À Table – 2nd Edition. Recently she has been named Head Chef for Ottawa Citizen’s Food columnist & Author of Mrs. Cook’s Kitchen, Gay Cook’s 85th Birthday Fundraiser.

Cezin also works closely with the Pikwadin Project; a program for adults with barriers, and currently employs a former student since 2013. She is also a spokesperson amongst teens to empower them through her experiences of failure and success.

Cezin also founded the Paper Bag project during the Truth and Reconciliation event in June 2015; she traveled to 4 Algonquin communities in a time sensitive manner to bring awareness of Residential school amongst First Nation students and Non-First Nation students, as well to show the survivors that we are here for them to help with the healing process.

Of her many accomplishments, Cezin remains humble; raising her two children in Kitigan Zibi Anishinabeg. Both her parents are residential school survivors, it is important that her parents know that their legacy, their language and culture remain strong and that they did right by her and her children.