Please watch this video from the 2019 Cando National Conference held at Lac-Leamy in Gatineau, Québec. The video showcases the CEDI Panel featuring the partnership between Okanagan Indian Band and the City of Vernon.

Through the CEDI program, Cando and FCM work with partner communities, consisting of First Nations and adjacent municipalities and often, other regional partners. As well, CEDI works to share lessons learned and stories of success as part of a community of practice with those who are interested in joint First Nation – municipal community economic development.

Although most First Nations and municipalities across Canada engage in community economic development planning and initiatives, they most often do so in parallel since they work in different jurisdictions. CEDI partnerships have identified many benefits to working together on joint CED, namely: improve regional economic development prospects, including employment opportunities, external investment and long-term sustainability; all while enhancing relationships with their neighbours and community members.

From 2013-2016, CEDI worked with six partnerships of First Nations and municipalities across Canada to enhance their community-to-community relationships and collaboration on joint CED initiatives. Some embarked on economic diversification and tourism plans. Others sought to attract new investors to their region. Most found that in the end, their partnership had the power to implement the joint visions that articulated in the beginning of the process. More than anything, CEDI partners came to value that they are stronger together.

In 2016, FCM and Cando were pleased to launch Phase 2 of the CEDI program, for First Nations and nearby municipal partners. Between 2016 and 2021, as many as 30 new communities will create joint economic development and land-use planning partnerships based on their shared desire for a better future. These new CEDI partners will benefit from the valuable lessons learned and shared successes of joint CEDI plans and strategies from Phase 1 CEDI partnerships, and from CEDI resources intended to support capacity building, including the Stronger Together Toolkit.

This video explores the impact of building positive relationships, demonstrated at their ceremonial signing of “Ezhi-Wiijikiwendiyang” or Friendship Accord, which articulates the spirit of their partnership and their commitment to work together moving forward, for the well-being of our communities. “Ezhi-Wiijikiwendiyang” translated from Anishanaabemowin roughly to ‘how we are friends.’
English: https://fcm.ca/en/resources/cedi/treaty-20-friendship-accord
French: https://fcm.ca/fr/ressources/cedi/traite-20-accord-damitie

Want to Get Involved?

• Become a Peer Mentor – we are always looking for experts in CED (for example, community planning, tourism, clean energy, or employment) to volunteer to work with participating communities to help them achieve their joint CED goals.

An Indigenous – Local Government Partnership Forum took place February 21-22, in Winnipeg.
This was a joint initiative planned and delivered by Cando, the Centre for Indigenous Environmental Resources (CIER), the Federation of Canadian Municipalities (FCM) and Indigenous and Northern Affairs Canada (INAC).

The Partnership Forum provided Indigenous and local governments the opportunity to share experiences with, and perspectives on the future direction of Indigenous-local government collaboration and programming offered in this area. Further, the Forum created a platform for communities to network and to share tools, resources and knowledge. 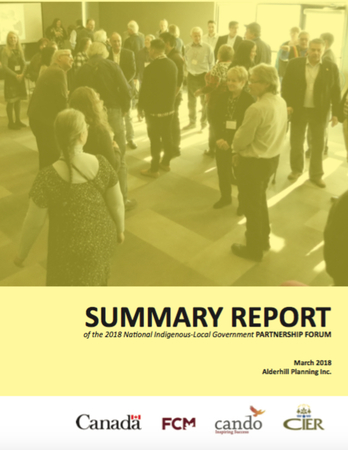 Muster your courage; take that lead of faith. The other orders of government aren’t actually the enemy – they can become your best allies. When you look at the downloading of services by the federal government to the provinces and from the provinces down to municipalities, we’ve got a lot more in common. If we can pool our resources and our knowledge, we can come up with some unique solutions that we wouldn’t have been able to come up with on our own. And that alone is well worth it. – Chief Roland Twinn, Sawridge First Nation, AB.

We are not dividing up a small pie into smaller pieces, but instead we are creating a bigger pie together. – Councillor Charles Fournier, City of Edmundston, NB

Trust is the biggest thing. If you don’t have that trust, you don’t have anything. Initially, we struggled through it because we were trying to keep score all the time and you can’t do that. Everything we do as an individual project is not going to benefit us all equally – it never will. And if we’re trying to do that, we’ll never get anything done. But collectively as a whole, all those projects, there’s a benefit for all of us. – Mayor Tyler Warman, Town of Slave Lake, AB

We are collectively the largest land owners in the Fraser Valley and our lands are well situated near critical infrastructure required for development and transport. Now more than ever in history is an opportune time for partnerships between First Nations and the business community to flourish. Business relationships built on honest, trust and respect will enrich our community and your organization. – Chief Clem Seymour, Seabird Island Band, BC